The region is located on the south side of the St. Lawrence, and it’s the continuation of the Appalachian range, watered by the waves of both the estuary and the Gulf of St. Lawrence. Gaspesie region, known also as the Gaspe Peninsula region, is a part of the Gaspésie–Îles-de-la-Madeleine administrative region of Quebec, consisting of the Gaspé Peninsula and the Magdalen Islands.

The Gaspesie covers the area of 20,103 square kilometres and its population is of about 90 thousand. The largest community of the region is the city of Gaspé with about 15 thousand inhabitants.

The Gaspesie peninsula is watered by crystalline rivers teeming with salmon, and many fishermen come here to enjoy the sport fishing. To the south of the region, the Chaleurs Bay is located, known for its sandy beaches. The legendary Appalachians, stretch all the way up through the Gaspesie region from the south-eastern United States. The International Appalachian Trail of about  700 kilometres long  (430 mi) with numerous shelters and camping spots draw hiking enthusiasts from Canada and the US. Besides, Gaspesie encompasses many parks and reserves, such as the Gaspesie national park, the Forillon national park of Canada, the Garden of Metis, the Biopark of Gaspesie and many more areas. Museums, theatres, art galleries, talented and creative artist and artisan-designer workshops, souvenir shops are just a few examples of local cultural expression.

Guests are welcome to share a great number of cultural activities, festivities and public celebrations As to hunting and fishing, Gaspésie contains dozens of salmon rivers, and a many ZEC or special hunting territories. Trout fishing, open-sea fishing and ice fishing are popular here. Route 132 circles the Gaspe peninsula. This route has two branches. One branch follows the coast and the other cuts across the peninsula at Sainte-Flavie.

Another route, the route 198 leads inland from the northern shore of the Gaspesie. This route crosses a number of rivers and forests. The route 198 winds its way along the York River to the city of Gaspé. 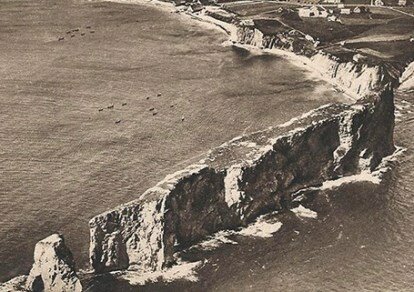 Percé Rock (Rocher Perce) as seen from the air, an old photo of 1920ies

To find out more about Gaspesie, read our articles: