The modern era arrived in Quebec by train. The first wood-burning locomotives appear in Quebec as early as in the 1830ies.

At the moment, the forests at the rivers' edges were felled and as the wood was essential to the building of the vessels, the railroads were built everywhere. The railroads brought logs from the interior of Quebec to the rivers. The trains moved the ore to the smelters, crops to town and people to settle almost everywhere.

The first railroad company, the Champlain and St. Lawrence Railroad was incorporated on February 25, 1932. In fact, that was the first Canadian railroad charter.  It was opened on July, 21, 1836. The inaugural train was pulled by the locomotive “Dorchester”.

Later, in 1857, the Champlain and St. Lawrence became part of the Montreal and Champlain Railroad which was leased to the Grand Trunk in 1864. Today, it forms part of the Canadian National system. The second railway company in Quebec (and the third in Canada) was open in July of 1847.

The Compagnie du Chemin à Rails du Saint-Laurent et du Village d’Industrie built a line of 12 miles from Lanoraie, on the St Lawrence downstream from Montreal, to Village d’Industrie (this village was later renamed Joliette after its founder, Barthelemy Joliette).

Curiously, this railway originally had wooden rails surmounted by iron straps. The railroad was taken over by the Quebec, Montreal, Ottawa and Occidental Railway in 1878. It was acquired by CP in 1884

On October 25, 1854, the Carillon and Grenville Railway was opened.

On November 1-2, 1856, the opening of the Grand Trunk Railway was greatly celebrated in Montreal. A general procession went through the city, a banquet in the large building belonging to the company at Point St. Charles was given, a torchlight procession and fireworks took place at night, a steam boat excursion to Victoria bridge was organised the next morning and a great military review took place in the down-town as well as a big illumination and ball at the Bonsecours Hall. Naturally, the demand of the railroads required engineers and experts to design and build the railways and the steel bridges, such as the Quebec Bridge, once considered the eight wonders of the world, or the Victoria Bridge. The first train operated over the Victoria Railway Bridge on December 21, 1859. The bridge was formally opened by the Prince of Wales, later to become King Edward VII, on August 25, 1860. 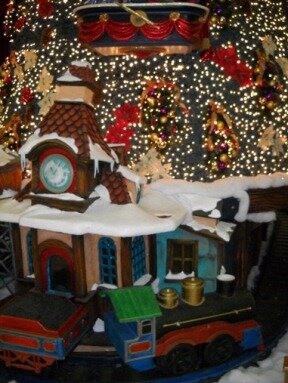