Timeline : Railroads in Quebec in the XIX and XX Centuries

July 1947: The second railway company is open in Canada. The Compagnie du Chemin à Rails du Saint-Laurent et du Village d’Industrie built a line of 12 miles from Lanoraie, on the St Lawrence downstream from Montreal, to Village d’Industrie (today Joliette). This railway originally had wooden rails surmounted by iron straps. This railroad was taken over by the Quebec, Montreal, Ottawa and Occidental Railway in 1878, and later, it was acquired by CP in 1884.

May 16, 1853: The first train in Ontario runs between Toronto and Aurora on the Ontario Simcoe and Huron Railroad Union Company. The first train was driven by W.T. Hackett who also took the first locomotive into Kansas City.

December 25, 1854: Opening of the Bytown and Prescott Railway between Prescott and Bytown (now Ottawa), 54 miles. First rail service to what is now Canada's Capital (Bytown was renamed Ottawa in 1855).

July, 1856: First section of the railway west of Toronto is opened between Toronto and Guelph by Grand Trunk Railway.

October 27, 1856: The Grand Trunk Railway opens its broad gauge line throughout between Montreal and Toronto (in fact, the section Montreal to Brockville was open on November 17, 1855). The first through train, consisting of 3 first class and 3 second class coaches, ran from Montreal (Point St. Charles) to Toronto (Don Station) and a similar train made the journey in the opposite direction. Departure was at 07:00 from Montreal and 07:30 from Toronto. The trains passed in the vicinity of Kingston Junction where a stop of 30 minutes occurred for lunch. The journey took 14 hours.

March 12, 1857: A Great Western Railway train breaks an axle while crossing a swing bridge and plunges into the Desjardins Canal near Hamilton. 59 people are killed. This was Canada’s first major railway disaster: Carrying about one hundred passengers, a Great Western  Railway train was traveling from Toronto to Hamilton. Nearing the bridge over the Desjardin Canal (uniting the towns of Dundas and Burlington, Ontario), the engine jumped the switch and followed by the whole train tumbled into the icy water below and 59 passangers and crew lost their lives.

December 27, 1859: The Grand Trunk Railway completes its line between Toronto and Sarnia and establishes a ferry service across the St. Clair River to Fort Gratiot (Port Huron).

1859: The first sleeping car is built at the Brantford shops of the Buffalo and Lake Huron Railway in preparation for the tour of the Prince of Wales the following year. The first Pullman sleeping car was produced in 1863.

December 31, 1860: The Brockville and Ottawa Railway opens the first railway tunnel in Canada under the town of Brockville.

June 29 1864: A railway accident on the Grand Trunk Railway at Beloeil, Quebec, takes 99 lives when a special passenger train carrying German immigrants went through an open drawbridge. This was Canada's worst railway disaster in the history.

October 3-4, 1873: The Grand Trunk Railway converts the gauge of its line between Stratford and Montreal, 421 miles together with 60 miles of sidings, from 5' 6" to the standard gauge of 4' 8 1/2". The track work was completed in 24 hours and occasioned but 16 hours interruption in the use of the main line. Before October, 1874, all Grand Trunk Railway lines east of Montreal, 542 miles, are converted from 5' 6" to standard gauge.

July 1, 1876: Through rail travel between Halifax, Quebec and the rest of the Canadian rail system is made possible. 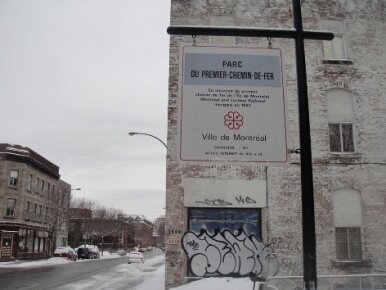 August 12, 1879: The Intercolonial Railway gains access to Quebec by purchasing the Grand Trunk line between Quebec and Rivière du Loup.

January 31, 1880: An Ice Railway is opened between Longueuil and Montreal by the Quebec, Montreal, Ottawa and Occidental Railway. 1880: The Grand Trunk Railway extends its line to Chicago, thus providing a through route from the American Midwest to the St. Lawrence at Montreal and Quebec and the Atlantic at Portland.

November 1, 1885: First train service established over CP between Montreal and Winnipeg via Ottawa, Sudbury and the Lakehead.

November 2, 1887: the Canada Atlantic Railway commences using the first passenger cars in Canada to be fitted with electric light.

June 3, 1889: The first CP train arrives in Saint John, NB from Montréal marking the completion of the Canadian Pacific Railway as a coast to coast railway.

March 1, 1898: Through service commences over the Intercolonial Railway between Halifax and Montreal. This is achieved through a series of leases and running rights agreements with the Grand trunk Railway.

24 October 1903: The National Transcontinental Railway Act is passed. In order to expand into Western Canada the Grand Trunk Railway agrees to build a line from Moncton, New Brunswick to Quebec, then on a more northerly route than on any other transcontinental line to a point on the British Columbia Coast, which was to become Prince Rupert.

July 3, 1904: First run of the Ocean Limited passenger train between Montreal and Halifax. This is the longest running train in Canada having operated continuously over the same 840 mile route.

August 29, 1907: The bridge under construction across the St. Lawrence at Quebec falls killing 75 men.

March 17, 1909: A train runs out of control into the Canadian Pacific Windsor Street station in Montreal. (track 7)  A broken spring hanger on locomotive no. 2102 caused it to lurch and a driving wheel struck a washout plug. The escaping steam scalded the crew who were forced off the locomotive. The train brake was applied by a brakeman but it hit the stop blocks at around 25 mph. There were six fatalities.

March 1, 1916: the Grand Trunk Railway Bonaventure Station in Montreal is destroyed by fire.

September 11, 1916: The bridge under construction across the St. Lawrence at Quebec falls a second time, killing other men.

October 17, 1917: First train over the Quebec Bridge over the St. Lawrence. This was constructed by the Dominion Government for use by the National Transcontinental Railway. This bridge was notorious in that it fell down twice during construction.

October 21, 1918: The Mount Royal Tunnel, Montreal, is opened for regular traffic by the Canadian Northern Railway which commences a through service between Montreal and Toronto via Hawkesbury and Ottawa. The first east bound train left Toronto at 23:00 on October 20 and the first westbound left Montreal at 08:15 on October 21. 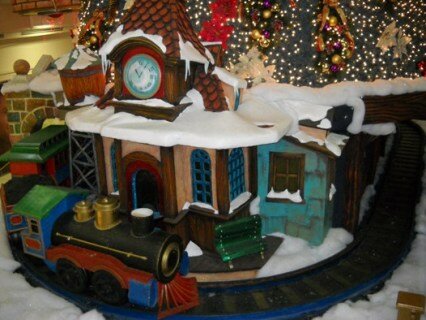