The Aquarium Park of Québec was created by Dr. Vadim D. Vladykov, pioneer of research in marine biology in Quebec. Dr. Vladykov dreamed about a scientific centre equipped with laboratories and aquariums in Quebec city. Besides, in addition to doing research, the centre would contribute to educating people in the natural sciences. Thus the Centre biologique de Québec took shape, in the 1956, when the first phase of the work ended after the construction of the rotunda, the auditorium, the aquarium corridors and the laboratory section,

Year after year, the installations were enlarged and existing services improved. Three basins for the seals were added, as well and many aquariums. Today, the Aquarium of Québec welcomes dozens of thousands of visitors every year.

Close to ten thousand specimens of fresh water and salt water fish, marine mammals, amphibians, invertebrates and reptiles live in the Aquarium’s different ecosystems, including polar bears, Pacific and Atlantic walrus and seals. They represent over 300 marine animal species. You can find there sea urchin, sea cucumber, starfish in the Coastal zone and discover the sociable walrus Arnaliaq (the walrus are sociable and friendly by nature, and they are as graceful in water as they are clumsy on land). 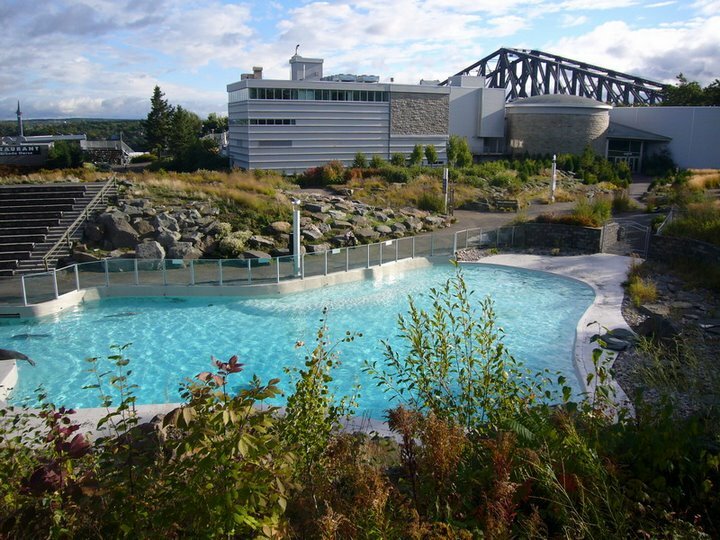 A glass tunnel beneath a large pool of 350, 000 litres of water allows guests to admire undersea life from a diver point of view.

Ah, yes! If you are wondering how to celebrate your child’s birthday, the Park Aquarium is an excellent choice. Its inhabitants voted (a polar bear voted against the decision, as well as a few fish, but democracy prevails) to provide a private room for the event. A meal with a birthday cake, a visit from the mascot of the Aquarium Park and plenty more surprises for the kids are guaranteed.

Address of the Aquarium park of Quebec: