Another important developmental concept is Theory of Mind (ToM). Children develop ToM at in steps, mastering milestones earlier if siblings are present. ToM is the ability of to infer what others are feeling and thinking. ToM is absent in children with Autism and Asperger’s Syndrome as established by the false-belief task (also called the Sally-Anne task). The hidden object paradigm goes roughly as follows: a story is presented in which Sally has a marble, which she puts in a box and leaves. While she is gone, her friend Polly takes the marble out of the box and hides it in a drawer. The question is then asked: Where will Sally look for her marble when she comes back? Only those with ToM are able to answer “in the box where she left it”, those missing the capacity say she will go directly for the drawer. 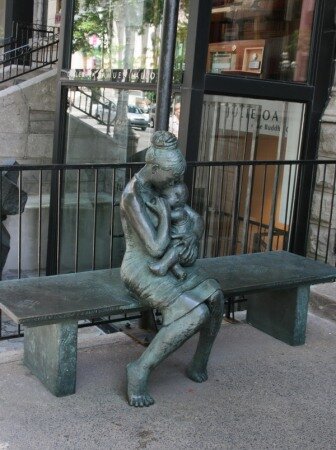 A mother and her baby. Photo : Provincequebec.com

Further, 8 year old children have a different understanding of intent and consequences, as evidenced by the following experiment. A script is presented depicting two boys, Harry and Ben. Harry was helping his mother set the table for dinner and accidentally knocked down a tray of plates, which shattered. Ben, on the other hand, was disobeying his father and trying to get cookies out of a forbidden jar on top of the cupboard. In the process, he broke a cup. When asked who of the boys had misbehaved, children below 10 years of age (children reach autonomous morality at age 10-11) designate Harry, because he made more damage. However, once the children are told why they were wrong in overlooking intent, they understood and gave the right answer if tested a week later.

Conformity of tastes has been demonstrated in little girls, who were asked to choose a favorite doll from two different ones. When told that their friend preferred the other doll and asked if they were right in picking the doll they did, the girls said they were wrong and that they should like the other doll better.