In the middle of the 19th century, China was in a state of political and economic stagnation. A number of countries were carving out parts of the Middle Kingdom for themselves.

Thus it was no accident that Chinese immigration to North America began around that time. In 1858m the first Chinese workers enter British-Colombia. They called that land the Golden Mountain and they hoped to find a new home there, but white workers weren’t receptive to those immigrants who were paid less and worked more.

Indeed, Chinese coal miners received a dollar a day while whites were paid about 2.5 dollars a day. Most Chinese immigrants worked at the construction of the Canada’s transcontinental railway, and once the transcontinental railway was finished, many of them travelled east to work in the eastern provinces. Some of them came to Quebec. They did not speak French or English, but they worked on construction projects, in mines and forests, and as male domestics replacing European women. In Quebec, many Chinese would work in a laundry, restaurant or grocery store. In 1901, there were about 1 thousand Chinese men in Quebec and… four Chinese women!

But despite the hardships, Chinese community slowly evolved. Men would combine financial resources and advance it, as a loan, to a one of them, the most promising, of course. In this way, several men acquired enough capital to start a laundry, a restaurant or other small business.

The Chinese community remained ghettoized and mistrusted until World War II when Canada suddenly had a new ally in China. Overnight, Chinese Canadians were no longer aliens. Many of them joined the military, and after the war, Canada changed its immigration policies (it took about 15 years, though), giving Chinese immigrants the same access to Canada, the Europeans had. The largest post-war influx of ethnic Chinese immigrants came from Viet-Nam, Laos and Cambodia as Quebec welcomed thousands of boat-people, in 1975.

Later, thousands of relatively wealthy Chinese have come to Quebec from Hong Kong, Taiwan and other Asian countries. 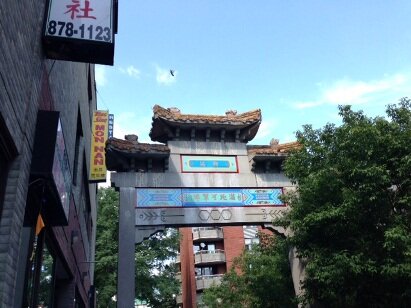 Gates at the Chinatown in Montréal. Photo: © Megan Jorgensen