The Pingualuit Crater, previously known as Chubb Crater (1950-1968) and New Quebec Crater (1968-1999) is a meteorite crater, located in the Ungava Peninsula of Quebec, Canada. It is 3.44 kilometres or 2.14 miles in diameter. Its age is estimated to be 120 thousand years old (this age was attributed after the Laval University expedition, in 2007).

The name Pingualuit means “where the land rises” in the Inuit language, who call it as well the Crystal Eye of Nunavik. The crater rises 160 m or 520 feet above the surrounding tundra. It is 400 metres or 1,300 feet deep. 260 metres (about 860 feet) deep Pingualuk Lake fills the depression.

The lake is thus one of the deepest lakes in North America. It holds some of the purest fresh water in the world. In fact, its salinity level is less than 3 ppm. For instance, the salinity level of the Great Lakes is 500 ppm.

The water accumulates solely from rain and snow and is only lost through evaporation. Every drop of water can last as long as 300 years. The Pingualuk Lake is second only to Lake Masyuko in Japan, in terms of transparency.

The crater was discovered on June 20, 1943, when a United States Air Force plane took photos of the Ungava region on a meteorological flight. The photographs showed the wide crater rim rising up above the landscape.

A known diamond prospector Frederick W. Chubb made a brief trip by air to the crater and explored it for the first time. A few expeditions followed. In 2007, Professor Reinhard Pienitz of Laval University led an expedition to the crater which extracted sediment cores from the bottom of the lake which were filled with fossil pollen, algae, and insect larvae.

It seems that the age of the crater was reduced as a result of this expedition. 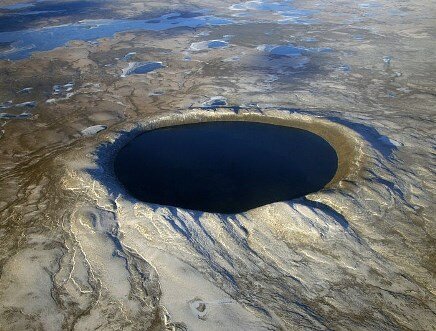