Once there was a great war chief who was killed by his own brother. Not in a fight, but secretly, by poison. The brother took over as chief, and also took his dead bother’s woman, who didn’t object. But the dead man had a son, a young warrior named Amaledi. One night the dead chief appeared to Amaledi and told him the whole story. And, of course, demanded that he do something about it. Poor Amaledi was in a bad fix.

Obviously he mustn’t go against his mother’s wishes, and kill her new man without her permission. On the other hand, no one wants to anger a ghost – and this one was plenty angry already. So Amaledi couldn’t decide what to do. To make things worse, the bad brother had guessed that Amaledi knew something. He and this really nasty, windy old man named Quolonisi began trying to get rid of Amaledi.

To protect himself Amaledi became a Crazy, doing and saying everything backward, or in ways that made no sense. This made his medicine strong enough to protect him from his uncle and Quolonisi, at least for a time. Quolonisi had a daughter, Tsigalili, who wanted Amaledi for her man. But she didn’t want to live with a Crazy – who does? – and she kept coming around and crying and begging him to quit.

At the same time his mother was giving him a hard time for being disrespectful toward her new man. And all the while the ghost kept showing up and yelling at Amaledi for taking so long. It got so bad Amaledi thought about killing himself, but then he realized that he would go to the spirit world, where his father would never leave him alone. So Amaledi thought of a plan. There was a big dance one night to honour the new chief, and some visiting singers from another town were going to take part. Amaledi took their lead singer aside and got him to change the song, telling him the new words had been given to him in a dream. And that night, with the dancer going around the fire and the women shaking the turtle shells and the whole town watching, the visiting leader sang: Now he pours it, Now he is pouring the poison, See, there are two brothers, See, now there is one. That was when it all blew up like a hot rock in a fire. The bad chief jumped up and ran away from the dance grounds, afraid he had just been witched. Amaledi had a big argument with his mother and told her what he thought of the way she was acting. Then he killed Quolonisi. He shouted Na! Dili! Dili! (There! A skunk, a skunk!), and slammed his war club into the wall of the chief’s house. He said it was an accident but I think he was just tired of listening to the old fool. Tsigalili couldn’t stand any more. She jumped into a waterfall and killed herself. There was a fine funeral. Now Amaledi was determined to kill his uncle. The uncle was just as determined to kill Amaledi, bu he was too big a coward to do it himself.

So he got Quolonisi’s son Panther to call Amaledi out for a fight. Panther was a good fighter and he was hot to kill Amaledi, because of his father and his sister. But the chief wasn’t taking any chances. He put some poison on Panther’s spear. He also had a gourd of water, with poison in it, in case nothing else worked. So Amaledi and Panther painted their faces red took their spears and faced each other, right in front of the chief’s house. Amaledi was just as good as Panther, but finally he got nicked on the arm. Befor the poison could act, they got into some hand-to-hand wrestling, and the spears got mixed up. Now Panther took a couple of hits. Yes, with the poisoned spear.

Meanwhile Amaledi’s mother got thirsty and went over and took a drink, before anyone could stop her, form the poisoned gourd. Pretty soon she fell down. Amaledi and Panther stopped fighting and rushed over, but she was already dead. By now they were both feeling the poison themselves. Panther fell down and died. So did Amaledi, but before he went down he got his uncle with the poisoned spear.

So in the end everyone died. By William Sanders. William Sanders lives in Tahlequah, Okhlahoma. He is Cherokee and he used to a powwow dancer and Cherokee gospel singer.

Today, he’s one of the best American writers To learn more about William Sanders and his stories: www.sff.net/people/sanders.

Well, frankly speaking, Cherokee live in both North and South Carolina, Oklahoma and other American States. They have never lived in Quebec. But the legend is too nice to be ignored. 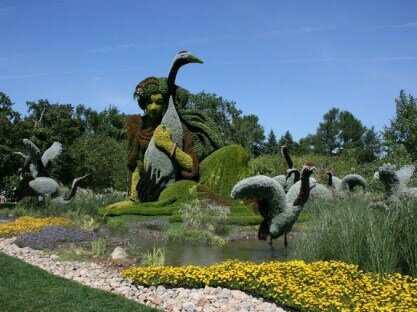 A nice photo illustrating a Chinese legend. © Photo by ProvinceQuebec.com