In the beginning there was only one water and the water animals that lived in it.

Then a woman fell from a torn place in the sky. She was a divine woman, full of power. Two loons flying over the water saw her falling. They flew under her, close together, making a pillow for her to sit on. The loons held her up and cried for help. They could be heard for a long way as they called for other animals to come. The snapping turtle called all the other animals to aid in saving the woman's life.

The animals decided the woman needed earth to live on. Thus Turtle said, "Dive down in the water and bring up some earth." So they did that, those animals. A Beaver went down. A Muskrat went down. Others stayed down too long, and they died. Each time, Turtle looked inside their mouths when they came up, but there was no earth to be found. Toad went under the water. He stayed too long, and he nearly died. But when Turtle looked inside Toad's mouth, he found a little earth. The woman took it and put it all around on Turtle's shell. That was the start of the earth.

Dry land grew until it formed a country, then another country, and all the earth… To this day, Turtle holds up the earth. Time passed, and the divine woman had twin boys. They were opposites, her sons. One was good, and one was bad. One was born as children are usually born, in a normal way. But the other one broke out of his mother's side, and she died. When the divine woman was buried, all of the plants needed for life on earth sprang from the ground above her. From her head came the pumpkin vine. Maize came from her chest. Pole beans grew from her legs.

The divine woman's sons grew up. The evil one was Tawis-karong. The good one was Tijus-kaha. They were to prepare the earth so that humans could live on it. But they found they could not live together. And so they separated, with each one taking his own portion of the earth to prepare.

The bad brother, Tawis-karong, made monstrous animals, fierce and terrifying. He made wolves and bears, and snakes of giant size. He made mosquitoes huge, the size of wild turkeys.

And he made an enormous toad. It drank up the fresh water that was on the earth. All of it. The good brother, Tijus-kaha, made proper animals that were of use to human beings. He made the dove, and the mockingbird, and the partridge. And one day, the partridge flew toward the land of Tawis-karong. "Why do you go there?" Tijus-kaha asked the partridge. "I go because there is no water.

And I hear there is some in your brother's land," said the partridge. Tijus-kaha didn't believe the bird. So he followed, and finally he came to his evil brother's land. He saw all of the outlandish, giant animals his brother had made. Tijus-kaha didn't beat them down. And then he saw the giant toad. He cut it open. Out came the earth's fresh water. Tijus-kaha didn't kill any [more] of his brother's creations. But he made them smaller, of normal size so that human beings could be leaders over them. His mother's spirit came to Tijus-kaha in a dream. She warned him about his evil brother. And sure enough, one day, the two brothers had to come face to face. They decided they could not share the earth. They would have a duel to see who would be master of the world. Each had to overcome the other with a single weapon.

Tijus-kaha, the good, could only be killing if beaten to death with a bag full of corn or beans. The evil brother could be killed only by using the horn of a deer or other wild animal. Then the brothers fixed the fighting ground where the battle would begin.

The first turn went to the evil brother, Tawis-karong. He pounded his brother with a bag of beans. He beat him until Tijus-kaha was nearly dead. But not quite. He got his strength back, and he chased Tawis-karong. Now it was his turn. He beat his evil brother with a deer horn. Finally, Tijus-kaha took his brother's life away. But still the evil brother wasn't completely destroyed. "I have gone to the far west," he said. "All the races of men will follow me to the west when they die." It is the belief of the Huron to this day. When they die, their spirits go to the far west, where they will dwell forever.

From the Archives of Blue Panther  Source of the legend: web.telia.com/~u15508742/huron.htm 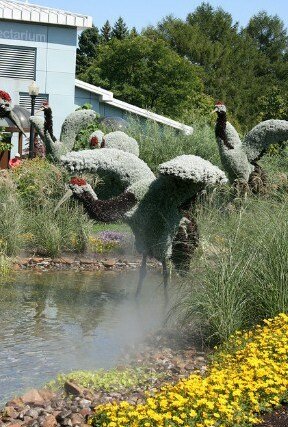