The present-day octagonal blockhouse of the Coteau-du-Lac National historic Site of Canada is a replica of the original structure, a unique building dating back to 1814.

It was built as a part of fortifications called to protect and defend the Coteau-du-Lac canal against a possible American invasion. The blockhouse is located about 30 mi (40 km) from Montreal, via Highway 20 (exit 17).

A thematic exhibition on two floors of the blockhouse presents the history of the building as well as its various uses and main architectural features. Although the Americans attacked the village of Les Cedres in 1776, Coteau-du-Lac was never the scene of any fighting during the two Anglo-American wars in Canada, but during the War of 1812, the Battle of the Chateauguay was fought, on October 26, 1813 near by.

The Oxford English Dictionary defines this word blockhouse as “a detached fort blocking or covering the access to a landing, a narrow channel, a mountain pass, a bridge or other strategic point [and later] an edifice of one or more storeys, constructed chiefly of timber, loop-holed and with embrasures for firing.” The octagonal shape of the blockhouse made it possible to keep watch over both the river and the site itself.

A quick-loading cannon was positioned on the upper storey. This storey housed 64 men. The ground floor was used at first as a hospital.

Later, it accommodated canal workers. The blockhouse is an ideal vantage point for enjoying the natural beauty of the surrounding landscape. 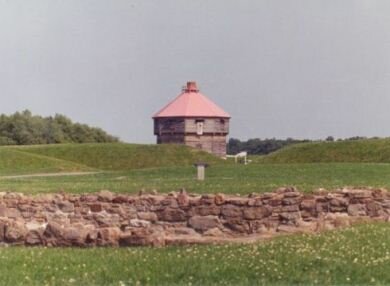