Aids to navigation warn sailors of hazards of obstacles and allow them to determine their position. They may be fixed, like lighthouses, floating like buoys, or electronic, like the satellite Differential Global Positioning System (DGPS). In addition to operating an extensive system of public aids to navigation nation-wide, the Coast Guard of Canada provides consulting services for the installation and maintenance of marking systems belonging to local communities, organizations or individuals.

Buoys and their Meanings

Buoys are veritable floating signposts, showing sailors where they can safely go. Buoys for different uses have distinctive shapes, colours and lights. There are three types of buoys: lateral, cardinal and special.

Lateral buoys mark the shipping channel like the lane markings on a road. They are either red or green and spaced at irregular intervals along the main and secondary channels of the St. Lawrence.

To stay in the safe channel, ships heading upstream, that is toward the Great Lakes, should always keep the red buoys on their starboard, or right side and the green ones to port, or left. This rules is reversed for downstream traffic, i.e. ships heading for the Atlantic.

Four different patterns of yellow and black show sailors on which side to passé in terms of the four cardinal points of the compass.

So-called special buoys are used for: 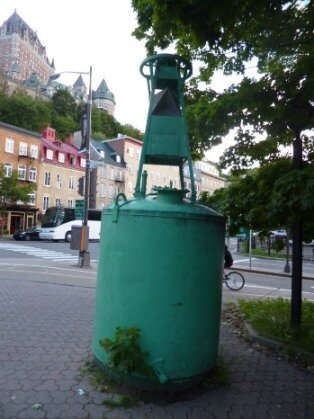 As the name implies, this model is used in shallow waters such as rivers, in places where pleasure craft predominate. Though traditionally made of steel, these buoys are now increasingly made of synthetic materials.

This buoy was used to mark the secondary channels of the St. Lawrence. It is higher than the buoys used on the main channel, and it is easier to service. Height: 4,7 m, diameter: 1,4 m, weight: 1,924 kg.

Other buoys were fitted with whistles, and this called for a much longer vertical axis. Their total height could be as much as 9.8 m and their weight around 6,000 kg.

These buoys used to be made of cast iron, but nowadays they are made of steel, and most are fitted with lights. Though manufacturing methods have evolved, buoys have retained their characteristic shapes. 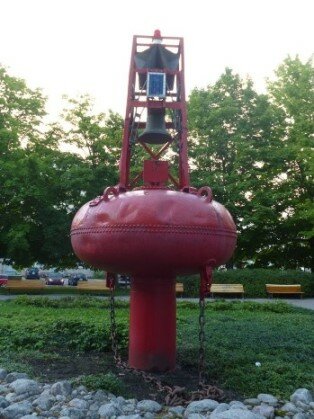