The status of the major waterfalls of the world is based on the height of the fall and on the volume of water flow.

Besides, the height of a waterfall is often subject to various interpretations. In most cases a waterfall starts with a series of rapids, then goes over a vertical or nearly vertical drop, and ends with a cataract over the debris at the bottom of the vertical drop.

For this reason, Della Falls, the highest falls in Canada, in British Colombia, is not regarded as a major waterfall. Niagara Falls, on the other hand, is acknowledged as one of the world's greatest cataracts because of the estimated mean annual flow of at least 6000 cubic metres per second.

The heights in metres given below are those of the highest vertical or nearly vertical drop. 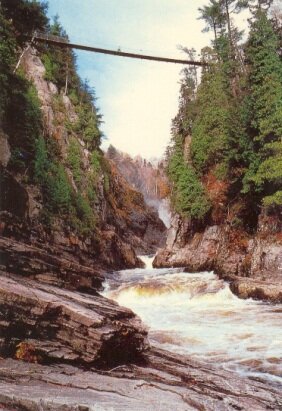 Reversing Falls are phenomena resulting from tidal action of the sea. At low tide, the inland waters empty into the sea over a rocky shelf. As the tide rises, the seawater forces its way against the river flow. The resulting turbulence, in the form of whirlpools, eddies and rapids, makes the falls appear to have reversed.Canada's three reversing falls are as follows: