The majestic Saguenay Fjord was carved during the ice age, and it allows the waters from the Atlantic Ocean and of the Gulf of Saint-Lawrence to flow into the heart of the Saguenay Kingdom. Its basin covers 88,000 sq. km.

The fjord spreads well over a hundred kilometres, which makes it one of the longest fjords in the world. Its width varies from 1 to 3,5 kilometres. It’s surrounded by steep rock faces reaching average heights of 150 metres. Cape Trinite goes over 411 meters and Cape Eternite goes over 457 meters. This arm of the sea is unique in the world.

Four billions years ago during the geological formation of the Canadian Shield, the Saguenay Fjord was formed following successive glaciations that dug deeply into its natural bed. The fjord has a particular geographical environment.

Although it is not under direct arctic influence, its climate is that of a northern region with its astonishing temperature variations. In winter, the ice that covers the fjord waters moves with the tides that may reach amplitude of five metres. The Saguenay fjord blends its freshwater with the seawater of the Atlantic.

Since the densities of these waters are different due to their salinity and temperature, the warmer freshwater from Lac Saint-Jean slips over the denser cold seawater of the Saint Lawrence River.

Two huge parks are located on the shores of the fjord:

The Saguenay Fjord shelters some 76 fish species, and over 60 of these are found exclusively in the fjord. Speckled trout, rainbow smelt and typical salt water species like cod, Atlantic redfish and even the enigmatic Greenland shark, also called laimargue can be found here.

The fjord is also home to a wide variety of benthic marine organisms that include starfish, sea urchins, marine worms, gastropods and other species. There are about 410 species of invertebrates in the fjord, and the majority, as those of the estuary, have a northern affinity. 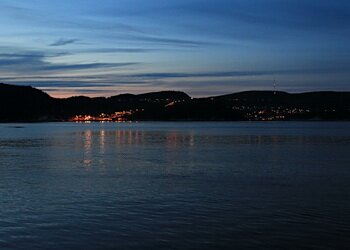 The Saguenay fjord allows the waters from the Atlantic Ocean and of the Gulf of Saint-Lawrence to flow into the heart of the Saguenay Kingdom. It drains the water of a catchment basin that covers 88,000 km2 and is 550 kilometres long. Photo : © V. Petrvosky 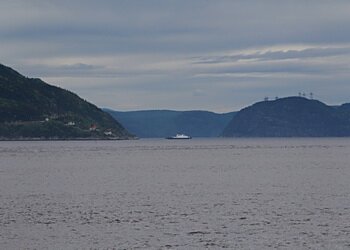 This arm of the sea originates at the centre of Quebec and in the northern forest east of Canada. It is unique in the world by its geographic location, the fantastic history and the distribution of the population that settled along the entire length of its shores. Photo : © V. Petrvosky 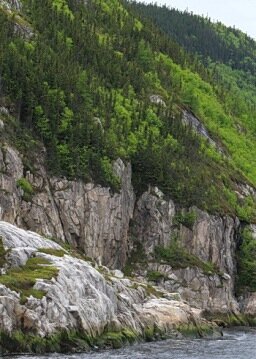 The seasons that highlight the irregular topography and the proximity to the Saint-Lawrence River produce a highly variable climate at different altitudes. Photo by © V. Petrovsky 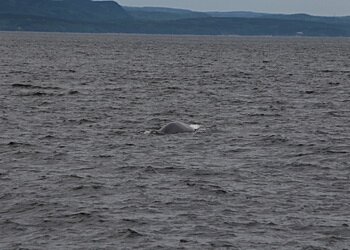 The Saguenay is known as a tourist dream destination with its whales cruise boats. Photo : © V. Petrvosky 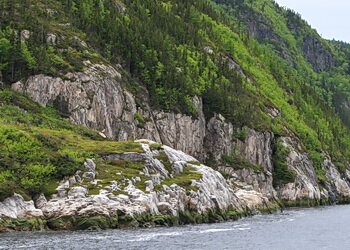 Deeply chiselled in the Laurentian Mountains, the Saguenay fjord blends its freshwater with the seawater of the Atlantic Ocean. If these two waters were placed in a bottle and observed, you would notice two very distinct layers similar to the vinegar and oil layers in salad dressing. Photo : © V. Petrvosky 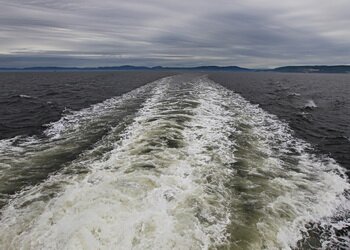 Since the densities of these waters are different due to their salinity and temperature, the warmer freshwater originating from Lac Saint-Jean slips over the denser cold seawater of the Saint Lawrence River. Photo : © V. Petrvosky 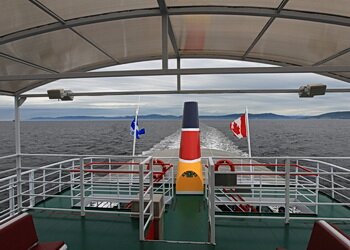 The Tadoussac–Baie-Sainte-Catherine free ferry links two sections of Route 138, 24 hours a day, all year round. Tourists can go on board of the M.V. Armand-Imbeau ferry or M.V. Jos-Deschênes ferry and enjoy a few minutes of marvels on the magnificent fjord of the Saguenay River. The crossing lasts about 10-15 minutes and allows you to relax while stretching your legs on the deck and to breathe the bracing sea air before continuing your journey. In summer, a third ship is allocated for the crossing. Photo : © V. Petrvosky 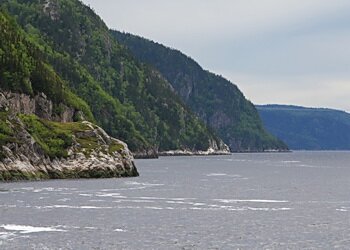 The natural environment of the Saguenay fjord overwhelms those who discover it. In winter, the ice that covers the fjord waters moves with the tides that may reach an amplitude of five metres up to 17 feet). Photo : © V. Petrvosky 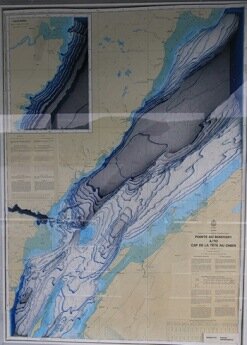 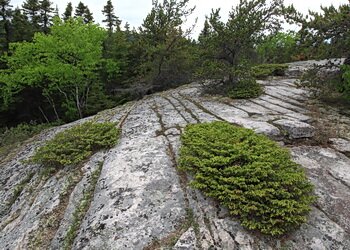 Amongst the fjords of the world, the Saguenay Fjord is considered as having great biological wealth. Photo by © V. Petrvosky 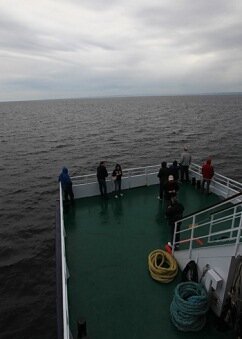 A ferry crossing the fjord. The hydrological characteristics enable freshwater and seawater species to live next to each other. The boundaries are well defined by the water salinity and temperature that allows them to live in their respective areas. This is due to the conditions created by water flowing in from the St. Lawrence estuary twice a day at high tide. Photo by © V. Petrvosky