When the Europeans settled along the St Lawrence River since the 16th century, the aboriginal peoples had already been living there for several thousand years, either in complex societies or in small family groups.

Each First nation had its own language, culture, traditions and beliefs.

In many cases, newcomers and the Natives established good relations. They exchanged their know-how and helped each other to survive. Through their knowledge of the land, the Amerindians helped the French and their descendants to adapt to the new northern conditions.

But over the centuries, due to economic and political reasons, relations between the Native peoples and the other inhabitants of Quebec became rare.

However, since 1980, exchanges between Native and non-Native Quebecers have intensified. In 1985, by a resolution of the National Assembly (legislative body of Quebec), the Quebec government became the first government in Canada to recognize the aboriginal nations. The Secretariat des affaires autochthons was set up. This council acts as a liaison between the Native peoples and the Quebec government.

At present, the eleven Amerindian nations and one Inuit nation are recognised.

There are 55 Native communities in Québec. The Amerindians of Quebec belong to two linguistic and cultural families, the Algonquian and the Iroquoian. Thus, the Abenakis, Algonquins, Attikameks, Crees, Malecites, Micmacs, Montagnais and Naskapis are part of the Algonquian culture. The Huron-Wendats and Mohawks are part of the Iroquoian culture. The Inuit are of different origin and culture.

Many Amerindians live on reserves or establishments administered by a band council made up of a chief and councillors. Many other live outside these communities, mainly in Montreal. The Inuit, formerly called the Eskimos, live in the far northern part of Québec, on the coast of Hudson Bay and Ungava Bay. They live in 14 villages.

Note than the 11 aboriginal nations are distinct. Even within a given nation, the way of life and socio-economic situation can vary from one community to another. Most of the aboriginal nations use their mother tongue and French or English as a second language. 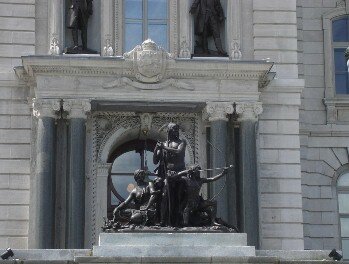 Monument to the First nations in face of the Parliament of Quebec. Photo : © ProvinceQuebec