Life of the Amerindians

Life of the Amerindians

Life of the Amerindians

In pre-historic Canada, about 1000 years AD, the innovation of horticulture profoundly affected the social structure of the indian societies, which become matrilineal.

The changes can be seen even in cooking utensils. Indeed, the small and slender vessel encountered by archaeologists in the previous period, suited to the slow cooking of meat, are replaced by large spherical vessels adapted to cooking corn soup.

Women are responsible for crop cultivation, and they supervise all stage, from seeding to harvesting. In addition, women prepare pottery, clothing, basketwork, rope, stone scrapers to prepare animal skins. They make as well harpoon points.

Both women and men fish, but only men hunt. Women harvest corn, squash and different other beans. As a rule, the camps and the villages are protected by a palisade   A very interesting characteristic of the Iroquoians is their habit of smoking tobacco. They cultivated a rustic variety for this purpose, different from our tobacco and smoked it in fired clay pipes.

Pottery and pipes were decorated, sometimes with nice effigies modelled on the bowl. Fragments of Indian pipes have been found on different sites in Quebec.

More and more evidence is being gathered to show that Norsemen appeared over Canadian eastern horizon in the years immediately preceding and following the year 1000. There is also a belief that over a hundred years before them – i. e. 875 – Celt-Irish monks came here via Iceland and landed on Brion Island in the Gulf of St. Lawrence. Settling in a place called Huitramannaland (country of the white men) by Scandinavian writers, on Cape Breton Island, they were completely cut off from the rest of the known world and were gradually absorbed by the native Micmac population. 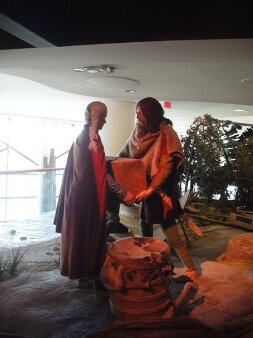