On the brink of war

On the brink of war

On the brink of war between Canada and the United States

After the Bostonians had decided to invite Canada to join the Continental Congress, Governor Carleton caught fleeting echoes of the sedition that was eating through the colony, for here and there a priest laid his hands on an incriminating document and reported his find to Quebec. But he did not know how to stop the mischief.

In February, 1775, he admits in a letter to Gage that the ground is slipping from underneath his feet. Even the gentry were not loyal, and the Governor was still less sure of the peasantry. Montreal was, as might be expected, the main center from which the anti-British propaganda started.

Of what was going there Carleton heard more than mere echoes, for a number of correspondents were anxious to keep him posted. The most assiduous of the informants was Hertel de Rouville who was rewarded for his services. Thus the governor quickly learned of a meeting of merchants in the Montreal coffee house on April 3, 1775, where John Brown, the continental congress representative presented himself and were people spoke in favor of electing delegates to Philadelphia (no decision was taken, though).

The tense feeling in Montreal grew more tense in May. One day, the inhabitants awoke to find that during the night some unknown hand had taken insulting liberties with the king's bust on the Place d'Arms. The face of the king was blackene, and around his neck hung a rosary of potatoes bearing a wooden cross with the inscription Voila le Pape du Canada ou le sot Anglois (here is the Pope of Canada and the stupid English).

The guilty were never discovered, though a reward of fifty guineas was promised by the officers of the Twenty-sixth Regiment and another of 200 dollars by the governor. The insult to His Majesty raised many tempers to the boiling point. The Americans had no doubts that the invasion of Canada would be an easy enterprise.

On the morning of May 10, 1775, the first Americans irrupted in Canada. 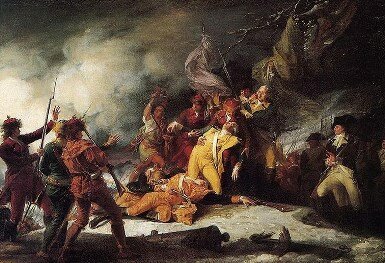