On March 15, 1603, Samuel de Champlain and Francois Grave du Pont sailed from Honfleur, France, on the Bonne-Renommee. They were delayed by ice floes, so they arrived at the Grand Banks only on May 2. On May 20, 1603, they reached Anticosti Island, the entrance to the St. Lawrence.

Champlain met Aboriginals, led by their great sagamo Anadabijou, at the mouth of the Saguenay. The founder of Quebec City took advantage of the opportunity to record extensive observations about the natives, their beliefs, feasts, clothes, food, and other customs and traditions. His account was later published in Paris.

Champlain and Grave du Pont sailed a fair distance up the Saguenay, then continued up the St. Lawrence toward their ultimate destination - Saut St. Louis (Montreal Island). But first, they anchored at a narrowing of the river of Canadas (St. Lawrence). Champlain referred to this place as Quebec, and this was the first time this term was used to designate the village of Stadacona. Undoubtedly, Samuel de Champlain noticed that it was a suitable location for a settlement, and that was where he would found Quebec five years later. Besides, sparkling quartz crystals attracted his attention.

This is his account of the voyage: “Along the cost of Quebec, there are diamonds in the slate rocks, and they are better than those of Alencon.” The sailors proceeded to Trois-Rivieres. According to Champlain, it was a place fit for living that could be quickly fortified. Nevertheless, Sieur Laviolette was ordered to establish a permanent settlement at Trois-Rivieres only 31 years later. On June 31, the explorers reached the mouth of the Iroquois River (Richelieu River).

Then they discovered an island that Champlain would later name St-Helen. Having walked a distance of a league along the rapids, he concluded that no vessel could pass through them. The natives gave Champlain a fairly exact description of the course of the St. Lawrence upstream from Montreal.

They told him about the rapids that marked the river before it reached Lake Ontario and then the other Great Lakes. Champlain also understood that the explorers were far from the Gulf of Mexico, through which they hoped eventually to cross the American continent and reach the fabled lands of the East.

The goal of the expedition accomplished, the explorers went back to Honfleur. 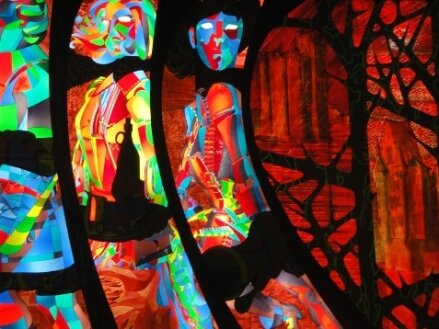