French and British in New France

Among the French settlers or inhabitants were Anglophone prisoners of various kinds. Some had been captured from New England in the many raids that culminated in the Seven Years War; some had deserted from the British army in the colonies to the south; yet others were black slaves who were bought or escaped from the same colonies. Some were Catholic Scots and Irish who had fled Protestant Britain and America. If the inhabitants of New France were not all pure laine, neither were the British a homogeneous people.

The experiment of bringing Scots, Welsh and English together into one nation was only first attempted in 1707. The relationship of the Irish with Britain is a source of friction to this day. The cultural, linguistic and religious divisions were profound, so profound indeed that many reluctant "Brits" took refuge in France and from there to New France.

This explains why the French army was so cosmopolitan, and why soldiers and many settlers bore names that ended in dit l'Irlandais or dit l'Écossais. The military was not the only institution harbouring English speakers.

New France's other great institution did as well. Most of the English girls in the records of Quebec's earliest religious communities had been taken prisoner in New England, and brought to Quebec by Canadian or First Nations warriors for ransom. Girls such as Esther Weelwright, Mary Davis, Martha French and Dorothea Jordan were ransomed, sheltered and educated by the French sisters, and some entered religious life. Few of the English speakers kept their mother tongue for more than a generation. If they stayed for long, they mostly married into or were adopted by French-speaking of First nations families, or joint French speaking religious communities.

Louisa Blaire, The Anglos, The Hidden Face of Quebec City, volume 1, 1608-1650 (we recommend this book to everyone interested in Quebec history). 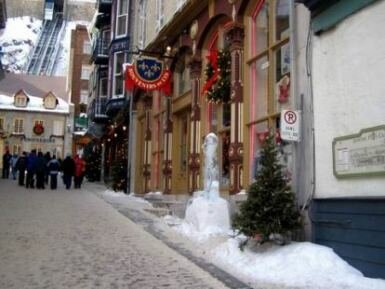