Since the Church opposed most theatre, opera and dancing, as well as much of the Enlightenment literary production, the colony of New France was not at all a symbol of cultural achievements.

For example, Moliere’s controversial play Le Tartuffe, which pocked fun at religious bigotry, was banned by the bishop of Quebec in 1694. Half a century later, in 1753, Bishop Pontrbiand incited Catholics to shun impious books. Few artisans and peasants owned books. Pious literature was dominant in private libraries of all social classes, especially the lives of saints. The countryside fiddlers and storytellers maintained the oral and folklore traditions of their French ancestors and added original elements of their own. Well, occasional plays were staged by college students, but strangely enough, in a French colony theatre did not develop, apart from these students’ productions and some plays produced by military officers. Musical production was centred on religious ceremonies.

Till now, all the surviving scores produced in New France and event till the 19th century all relate to church music. Despite clerical censure, dancing was a favourite pastime of the colonials in both the French and the British regimes. “Scandalous fashions” imported from Paris and featuring the so called fetiscas low cut-dresses were presented at social balls and dinners. According to Francois Bigot, Intendant of New France, during the pre-lenten carnival in 1749, members of the local elite outdid each other. One witness describes dances lasting until 6.30 in the morning and sermons in the churches threatening to withhold Easter communion from those who dared participate.

The advent of newspapers provided some cultural content at the end of the 18th century, but local literary production did not become important until the mid-nineteenth century. The first permanent theatre was open in Quebec (let’s say in Canada) in 1825, opened by the financial tycoon John Molson. Still, priests tried to control the morality of the Francophone, and encouraged the popular classes to opt for pious entertainment.

However, the first novel written in Canada was the History of Emily Montague, by Frances Brooke. She was the wife of the Chaplan of the Garrison at Quebec Between 1763 an 1768, and the book gives graphic sketches of life in Quebec during that period. 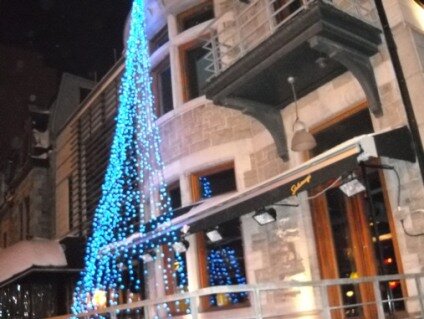