Towards the end of the 19th century new industries in Quebec, such as asbestos, aluminium, hydroelectricity, pulp and paper required investments.

The Americans could provide money, and American capital and culture began to flow. Americans came as the bosses of the new industries that their capital was establishing.

The American presence began to shape architecture too. For instance, it was an American architecture Bruce Price who built Chateau Frontenac in Quebec City.

Many buildings combined American and French classic styles Americans began to arrive in Quebec in great numbers. They delighted in the exotic romanticism of the province. They saw a small bit of medieval Europe. They rode about as they were in a picture book. With the railway making the province of Quebec an easy and comfortable trip, tourists began to arrive in ever great numbers. Bed and breakfast and hotels sprang everywhere. Many came here to admire a country untainted by the industrial revolution of which they were weary. 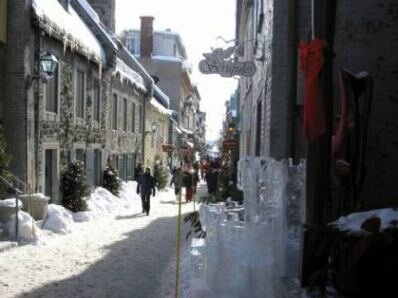