After the Conquest, in Canada, as everywhere else, most of the elite and many merchants, artisans and clerks could read and write, but the popular classes were largely illiterate. Some historians estimated than fewer than 10% of peasants could sign their marriage act at those times, and we don’t talk about reading books or papers. However, since there were no printing presses in New France, there were no newspapers, and books were imported from France.

There were no public libraries, but some religious orders and colleges loaned books. The first printing presses in Canada were imported by the British, after they had won the war.

The Quebec Gazette, the very first newspaper, started publication in 1764, It was published once or twice a week by printers who worked alone or with a journeyman on hand-operated wooden presses. For the most hard operation, the slave labour was used. Initially sales were low. The first issue of the Quebec Gazette sold only 143 copies.

But the new government was eager to help and commandeered some advertising services. In Montreal, the first newspaper was Montreal Gazette, established in 1778 by Fleury Mesplet, a remarkable man, a revolutionary from Lyon, France, who came to Canada to encourage Canadians to join forces with the Americans in their battle for independence. The Montreal Gazette was bilingual. It was suspended in 1779 because of its political positions, which Mesplet dared to express during the war. The editor was imprisoned and held incommunicado for months, such was the destiny of the first Canadian journalist. The Montreal Gazette began publishing again in 1785, but this time, without Mesplet, it was closely identified with Anglophone elite and merchants.

The Quebec Mercury and Le Canadien were two other important newspapers of the time, the latter identified with the French Canadian reformers and the former with the Anglophone clique. By the beginning of the 19th Century, the most popular newspapers, such as the Montreal Herald were selling about one thousand copies of each issue. 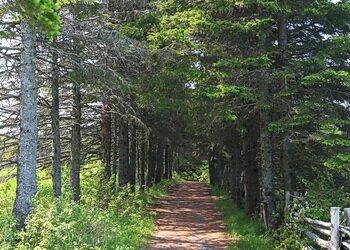 Newspapers are made of trees. Photo : © ProvinceQuebec.com