Champlain's Second Voyage to Canada in 1608

The founder of Acadia and especially of Port-Royal, Samuel de Champlain set sail to Canada again. On June 3, 1608, his ship arrived at Tadoussac anchoring in the roadstead, a league away from a small harbour.

The vessel was unable to enter the harbour because of the unfavourable wind and tide that lowered Champlain’s boat. On the shore, he met a group of Basques, and, after a long discussion, he secured a deal with them. According to the agreement, no hostile actions were to be tolerated between the French and the Basques. Champlain also met with a number of fur trading natives. Several Indians came to the French vessels on canoes, eight-to-nine-pace long and about a pace- or pace-and-a-half broad in their middle, growing narrower toward the two ends.

According to Champlain, the canoes, if not managed properly, would easily turn over. They were made of birch bark, strengthened on the inside by little ribs of white cedar, very neatly arranged. The boats were so light that they could easily be carried by one person. In the water, however, each canoe could carry a great weight.

For two following weeks, Champlain visited some parts of the Saguenay River. He was impressed by its incredible depth: one hundred and fifty to two hundred fathoms. He described a few islands: very barren, only rocks covered with small heathers.

Most of the area consisted of mountains and rocky promontories, and Champlain found it to be a very unattractive country. On June 31, 1608, Champlain set out from Tadoussac to the place where he would later found Quebec. Six leagues away from Tadoussac, he passed by the island called Hare Island. From there, the vessels proceeded to a little river, dry at low tide. The explorers named it Salmon River, since they caught some of these fish in it.

They arrived at Isle aux Coudres that Champlain described as nearly level, with meadows on the western side and rocky points extending into the St. Lawrence. But on the southwest side, the island was very reefy yet very pleasant because of the surrounding woods. Coasting along from Isle aux Coudres, the expedition reached a cape of Tourmente, five leagues away. Champlain named it so, because, no matter how little the wind, the water rose as if at full tide. The sailors proceeded to the Isle d’Orleans, two leagues away from the cape.

Champlain found it very attractive: it was generously covered with woods and meadows. Nevertheless, he considered sailing there very dangerous because of the numerous points and rocks between the main land and the island. On July 3, 1608, Champlain arrived at the point where the St. Lawrence narrows, one league away from the Island of Orleans. He noticed this strategic location back in 1603. That is exactly where Samuel de Champlain decided to build the first permanent European settlement in Canada. 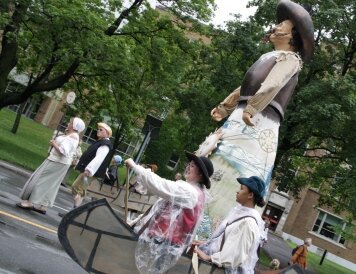