In June, 1759, the English fleet bearing over nine thousand men sailed into the pool near Quebec City and dropped anchor. General James Wolfe knew very well than he should take the capital of New France before winter would make the attempt hopeless. Joseph de Montcalm knew that as well.

But he was aware of how poorly his men were equipped and how little support he could expect from France. He doubted his ability to resist for a long time. Most of the French forces were spread along the Beauport shore from Quebec City to the Montmorency River, thus covering a distance of ten miles. The English placed their camps in three positions: at Levis, opposite Quebec; on the western point of the Island of Orleans; and just beyond where the Montmorency River tosses itself over the cliff into the St. Lawrence in a waterfall.

Besides, part of the English fleet anchored between the Island of Orleans and Quebec City. Some ships succeed in going a short distance up the river above Cap Diamond. All through the summer months the fight for Quebec City went on. The guns of the British pounded the lower town. From the height above, the French replied bravely. At the end of July, 1759, Wolfe ordered some companies to make an attack on the French forces on the Beauport shore. This was a very unwise move, as the enemy was oh higher ground, and the British would have suffered a terrible loss had not a severe rainstorm covered their retreat to their boats.

The British were growing anxious. The weeks were passing, and nothing had been gained. Red maples here and there reminded that fall was near, and after fall came winter. Wolfe had to move his men from the Montmorency camp to Levis, still without a definite plan.

Finally, on the 10th of September, Wolfe took a walk to the Etchemin River. He stopped there and as he looked across the St. Lawrence, he conceived a plan of the final attack against Quebec City. This attack took place on September 13, 1759.

The Battle of Montmorency

Wolfe landed 12 companies of Grenadiers on the Beaupré shore on July 31, 1759.

The English discovered that the redoubt they occupied was within firing range of the French. Reinforcements were called in and an assault ordered on the entrenchments.

Under heavy enemy fire, the soldiers attacked. However, a violent thunderstorm soon soaked the gunpowder ending the day’s fighting.

The British withdrew leaving over 400 dead, missing or wounded. On September 13, Wolfe found a better way to take the City of Quebec. 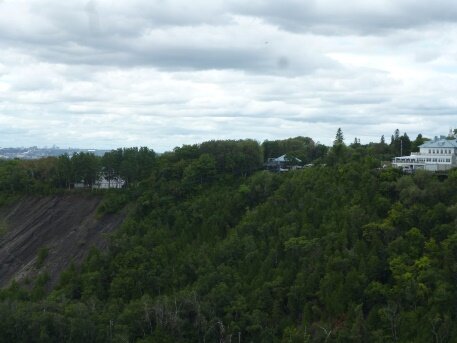 A Natural Fortress : From the heights of Montmorency, Wolfe could observe Montcalm’s defenses : 10 800 French soldiers and Canadian milita with dozens of redoubts. Photo: ProvinceQuebec.com 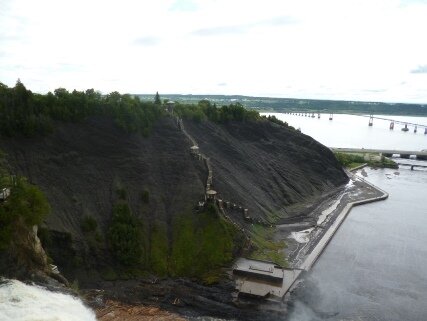 General Wolfe had camps and batteries at Pointe Lévy (across from Québec) and on the Isle of Orleands. Two hundred vessels (including 49 warships) dropped anchor off the island carrying 8 500 soldiers and 13 500 sailors. General Wolfe had to act quickly as the season was drawing to a close. Photo: ProvinceQuebec.com 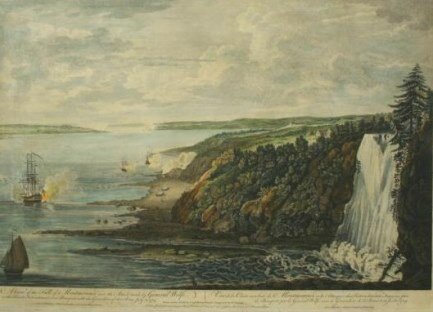 View of Montmorency Falls or Sault de Montmorence and of the Attack on the French entrenchments near Beauport by General Wolfe with the Army Grenadier on July 31, 1759. Drawn of the spot by Cap. Hervey Smyth. Engraved by Wm Elliot. Archives nationales du Québec, p-600-5/GH-470-134. Quebec and the Montmorency Falls, Forrest C. Ramus, 1823, National Gallery of Canada, 18495.