In every society the analysis of criminal activity provides good insights into social relations and many other matters.

Court records from the French regime are fairly complete and have thus been used as the bases for a number of several studies. Curiously enough, the archival records of the British period, in contrasts, have received almost no archival treatment for long periods of time. Even today they are still largely unexploited. New France is often depicted as a harmonious and peaceful society, in which strict morality dominated thanks to strong religious traditions. In fact, criminal activity and physical violence did exist in the colony.

For 47 years, from 1712 to 1759, the historian Andre Lachance counted 82 cases of serious crimes like murder, duelling, and infanticide. In fact he included suicide in his list since it was considered murder. All this in a colony with a population of about 30,000-60,000. Brawls in taverns and barracks and among neighbours were commonplace.

These cases account for half the activity in criminal courts of New France. For instance, in one case, two Quebec shoemakers, Louis Rousseau and Joseph Dugas, argued for a game of billiards. One of them accused the other of cheating. After exchanging insults, the two men attacked each other. Rousseau bit off two of Dugas’ fingers. But the brave Dugas bit off part of Rousseau’s cheek. After physical violence, theft was the most prevalent crime, often in form of property crime, namely night time break-and-entry into homes or stores.

There were also crimes against the state, which took two major forms: assault on judicial officials and forgery. Sometimes bailiffs were threatened with axes and so on. As to forgers, they were particularly active, and many of them were soldiers who made or altered card money (card money was a form of payment in New France, invented and introduced in the beginning of the 18th century. The real playing cards were used as money.

The governor had to sign them and assign a sum so this money would have legal course). Social protest didn’t exist. In 1714 a group of peasants, some armed with muskets, of the parish of St-Augustin 20 km southwest of Quebec marched on the capital to protest the cost of imported food. As soon as troops appeared, the protestors vanished, no persecutions followed. As to sexual crimes, seduction was the most common form.

Rape and bigamy occurred sometimes. Adultery… hum… who knows… but there are recorded cases of couples accused and charged for co-habiting before marriage.

Later, justice was hunded out (by mid-19th century country people): it fee on those who infringed regional or moral laws. The culprit was stripped of clothing and covered with pine tar, rolled in feathers, then placed astride a fence rail. Thus, tarred and feathered it was under stood he would now leave town. 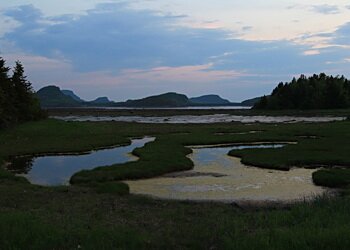 From 1712 to 1759, in 47 years, only 82 cases of serious crimes (like murder, duelling, infanticide and suicide) were counted in New France. Photo: ProvinceQuebec.com