In 1775 the inhabitants of Lower Canada (Quebec) refused all invitations to join the colonies of New England in their revolution. During the War of 1812, they fought off American attempts to impose their rule and republicanism on British North America. Yet the two decades that had followed the war of 1812 were marred by growing dissatisfaction with the political process in the country.

The greatest source of the problem was found in the fact that the popularly elected Legislative Assembly of Lower Canada was under the control of established elites. Elected reformers pushed for truly representative government (divisions hindered the progress, though).

For instance, anticlerical reformers alienated those reformers who supported the Roman Catholic Church. Off all the reformers in Lower Canada, the most prominent was Louis-Joseph Papineau, leader of the Parti Patriote. The Parti Patriote presented the so called Ninety-Two resolutions and submitted the list of these demands to Westminster in 1834. The rejection of these resolutions three years later sparkled the fire of rebellion in Lower Canada, and ultimately, Upper Canada.

The Patriot Rebellions began in 1837. Galvanized by Papineau, armed groups began to organize in order to beat back the British military which had been called in to restore order. The fighting in both Canada continued throughout the years 1837 and 1838. Led by Robert Nelson, Patriotes staged two short-lived and unsuccessful invasions. A few battles took place and several hundred people died in the battles. More than a dozen were executed. The military defeat was swift.

Dr. Wolfred Nelson (1791-1863) was among the rebels. After beating Gore’s troops at Saint-Denis on November 22, 1837, he attempted to flee to the United States. Nevertheless, Lower Canada's only declaration of independence was delivered by Nelson on Québec soil.

During this political crisis, the Town of Waterloo served as refuge for many of both the French and English-speaking merchant class.

Upper Canada, too, was invaded by the people who sought to establish a republic or wished Upper Canada to be absorbed by the United States. But all the invasions were ill-planned. In Upper Canada they lacked any significant support. All met with failure. Within three years of the failed rebellions, the two Canadas were united as the Province of Canada. The new political entity, which was not stable, came to an end inn 1867, when the Canadian Confederation was born. 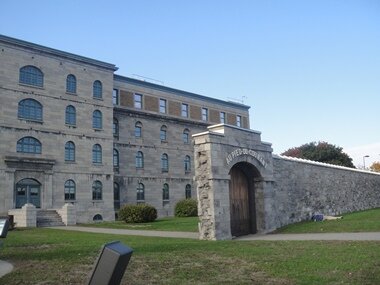 The Prison-des-Patriotes, located in the basement of the Au Pied-du-Courant building (903, avenue De Lorimier, Montréal, H2K 2V9), presents an exhibition on the 1837-1838 insurrections, the background to the Patriotic movement and the impect of these events on politcal life in Quebec and Canada. Photo: ©Provincequebec.com