Preface to the Battle

Preface to the Battle

Preface to the Battle for Quebec

During the Seven years’ War, both the French and the British sent troops to protect their interests in North America.

The Marquis de Montcalm was sent to direct the war for the French, and although the General did not know much about the country, he soon proved to be an able commander. He led his men to one victory after another.

During the first two years of the war, Montcalm captured Fort Oswego on Lake Ontario and Fort William Henry near Lake George. The he defeated the enemy after a fierce fight at Fort Ticonderoga on Lake Champlain.

It looked that the English were going to be defeated. Then the tide began to turn. In fact, the General Montcalm was not receiving from France the support needed to consolidate his victories.

At the same time, the English forces had been strengthened by new leader. The fortress of Louisbourg, of which the French were proud, was captured by Admiral Boscawen, General Amherst and James Wolf. Wolf was a young brigadier, sent to America by the king George III in spite of the older general who told the king than Wolfe was ill and mad. (James Wolfe was promoted to the rank of general; he died at the age of thirty two).

- Mad, is he? – replied George III. – Then I wish that he would bite some of my other generals.

Well, the king made a very wise choice. Facing Wolfe, the French were gradually forced to give up all that they had won. They had to retire with the borders of New France.

Famine struck Quebec just prior to the Conquest. People vainly watched for relief ships from April 1757 to May 1758 when aid from France managed to elude the British blockade. The populace had been reduced to a daily ration of two ounces of bread, and trough they ate their horses hundreds died of starvation.

The British followed the French, seizing one fort after another. In 1759, Joseph de Montcalm knew that, unless a strong force was sent from France very soon to help New France, the long struggle could only end in the defeat. Montcalm, however, was not a man to give up easily.

Montcalm brought nearly all his army to the neighbourhood of Quebec City. The French army waited the great attack, the French knew was coming. 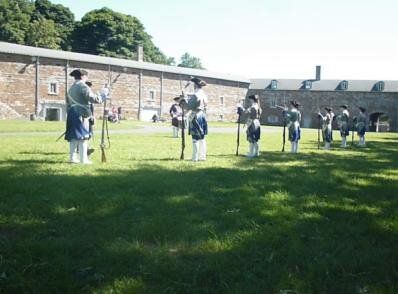 People vainly watched for relief ships from April 1757 to May 1758 when aid from France managed to elude the British blockade… Hundreds died of starvation. Photo : © Provincequebec.com