The French Strike Back

The French Strike Back

The French Strike Back

During the winter of 1760, the English soldiers, stationed in Quebec City after taking it, suffered a lot.

They were not accustomed to the bitter conditions of the bitter Canadian, and their clothing was not heavy enough to keep them war. There was a shortage of firewood, and to add to their distress, suitable food was lacking, as very few vegetables had been grown about Quebec during the previous summer when fighting was going on. The Governor Murray did his best for the comfort of both French and English.

The nuns from the Ursuline Convent cared for the injured and the sick. The sisters knitted warm socks for the soldiers – mainly for the Highlanders, who found temperatures very hard on their bare legs.

In spite of all the efforts, life in Quebec City was very hard. Knowing the conditions within the city and thinking that he might retake the capital by a sudden attack, Chevalier Francois de Levis, commander in chief of the French army, gathered together the soldiers who had retreated to Montreal, and formed them into a new army. This force was ready to march on Québec in the spring 1760.

As soon as the snow began to melt, Levis started for Quebec with seven thousand men. Several thousand more joined the force on the way. When Levis drew near Quebec City, he had the army twice the strength of the English within the walls. As soon as word of the approach of Levis reached the English, General Murray decided to march out and meet the oncoming foe in the open field west of the city.

A new battle for Quebec City was imminent. 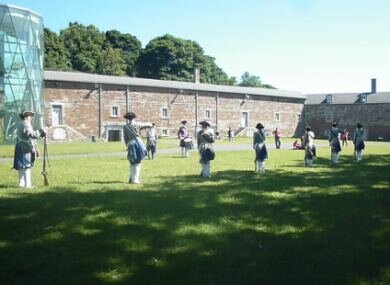