Federal-Provincial Relations during the Duplessis Government

In the 1944 election Godbout's Liberal government was defeated by Maurice Duplessis. An important factor in the defeat was the association of Adelard Godbout with federal Liberals, as many francophones felt betrayed my King's ambiguous stand on conscription.

Duplessis capitalized on this resentment by portraying himself as a defender of provincial autonomy, French language and traditions. Throughout the postwar era, federal provincial conflicts over jurisdiction became thus prominent political issues. In fact, centralization and the thrust for expanded federal participation in the social sector were reinforced. The federalists called for a pan-Canadian unemployment insurance plan and assumption by the central government of Canada of all the costs of old-age pensions.

In 1944, introduction of the Family Allowance signalled the coming of the welfare state. Expansion of federal cost-sharing programs, such as programs for universities, highways, etc., emphasized federal ambitions in many sectors traditionally reserved for provincial authority. This federal intrusion into provincial domains was difficult to resist because of the structure of government finances. In the 1930eis, about 50% of taxes in Quebec were collected by the federal government, 10% by the provincial government and the rest by municipalities. The Second World War accelerated the tendency.

In 1945, the government of Canada collected more than 80% of taxes in Quebec, while the province had slipped to 7%. Most Canadian provinces accepted these federal funds and programs. Quebec decided to resist in the name of autonomy. Quebec began marshalling ideological and statistical support for provincial autonomy, and use the support of intellectuals to justify its strategy.

In 1954 provincial Royal Commission of Enquiry on constitutional Problems produced the Tremblay Report, which defined Canadian Confederation as a compact in which the federal government had been a creation of the provinces. According to the Commission the provinces had the right to impose direct taxation to finance programs in their exclusive jurisdiction. The Quebec government used the report to establish a provincial income tax the same year. The road to autonomy was open.

Foresighted Cléo Soucy, Chief Parliamentary stone carver: Among the ten carved shields over the ornate entrance through the Peace Tower to the center block of the Parliament buildings there was, for many years, a black one. The other nine shields bore the coat-of-arms of the provinces of Canada. Soucy had persuaded the architects to include the 10th blank. Then after holding out for 82 years Newfoundland entered Confederation in 1949 and Mr. Soucy happily filled in the blank. 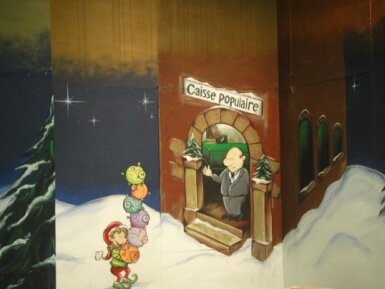