In Quebec, in the 19th century, the construction of the canals reached its peak. Indeed, for over 100 years, these canals would play a crucial role in the economic development of Canada.

The Outaouais River (Ottawa River) is one of the main tributaries of the St. Lawrence. In the 19th century, however, it became clear that its rapids between Montreal and Ottawa (the largest being Long Sault rapid) were a major obstacle for navigation. Actually, anyone travelling to the Great Lakes or to the Laurentians just north of Montreal had to face these rapids. Trade and military requirements of those times of tension between Canada and the United States would bring about a question of finding a better way for boats to bypass these hurdles.

Overcoming these rapids using locks was the best solution, although a first attempts to bypass the rapids date back to the 1600s, when three portage trails where established on the river’s north shore.

The first canals were simple trenches, created by removing rounded rocks, which were very common on the north shore of the Outaouais River. Of course, these simple waterways had no locks.

The Pointe-Fortune Canal with one lock is built, thus, in 1818 opposite Carillon on the south shore of the river. At that time, the need to exploit forestry resources combined with the need for a secure communication route would result in another navigation system.

Besides, during the war of 1812 between Canada and the US, constant American attacks along the St. Lawrence showed that communication lines between Kingston and Montreal, the two main Canadian military strongholds could be severed in a few days. 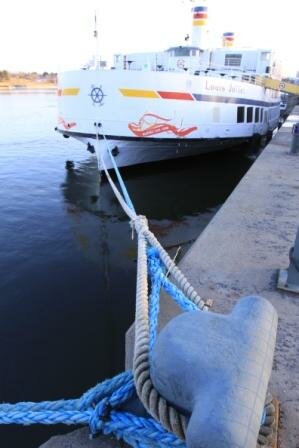 The Ottawa River Canal and the Rideau Canal were thus conceived to offer an alternative route in the event of a new war with the neighbour.

The system was built between 1830 and 1833. It consisted of the Grenville Canal, the Chute-a-Blondeau Canal and the Carillon Canal. These canals had eleven locks and the draught was under 2 metres. As the canals were originally intended purely for military purposes, they were built by the Engineers of the British army.

Later, forestry becomes main economic activity in this region, and in 1867, local business demands that the government carry out improvements to the network because the original system had become outdated.

Between 1873 and 1882, a second canal system was built to make the passage deeper. The new system consisted of two canals: Grenville and Carillon. The construction of a dam upstream from Carillon raised the level of the Outaouais River enough to render the Chute-a-Blondeau lock useless.

With the decline in the timber trade, the canals would be used in the last quarter of the 19th century for the transport of firewood, pulpwood and lumber. However, the competition of the railways along with the increase of pleasure boating, eventually resulted in the Outaoauis River canals changing from commercial waterways into tourist attractions.