The Seven Years’ War began in 1756, but the first conflict of this war occurred in North America on 28 May, 1754, at Jumonville Glen (present-day Pennsylvania), when the French and the British militia clashed.

The British were commanded by Lieutenant Colonel George Washington, the future revolutionary leader. A small group of the French was commanded by Ensign Joseph Coulen de Villiers de Jumonville.

The force of 31 French Canadians approached George Washington, and the French officer asked the English to withdraw their troops from the territory, the French claimed as their land. In response, Washington and his men opened fire. 10 French militiamen were killed and 21 were taken prisoners.

All the prisoners were massacred the following day without any apparent reason, and their bodies were left to the wolves. The British claimed to have been fired upon by the French. The explanation is ridiculous, as no English was wounded. Besides, George Washington never explained why a group of 30 French would fire upon about 200 English and then let the enemy kill and capture all the French.

Even more, no explanation for the massacre was ever given. On July 3, 1754, the French, led by Sieur Louis Coulen de Villiers, the half-brother of the murdered ensign, attacked George Washington forces at Fort Necessity. Washington was taken prisoner and signed a document, confessing the assassination. He was released. Later he claimed than he didn’t read the French language, so he didn’t know what he was signing. A rather odd explanation for an educated man.

Even in Great Britain, this incident was criticized. Horace Walpole, the 18th century British statesman went so far as to identify the massacre of Jumonville Glen, and not the invasion of Saxony, as marking the beginning of the Seven Years’ War.

According to Horace Walpole, “it was the volley fired by a young Virginian in the backwoods of America that set the world on fire”. 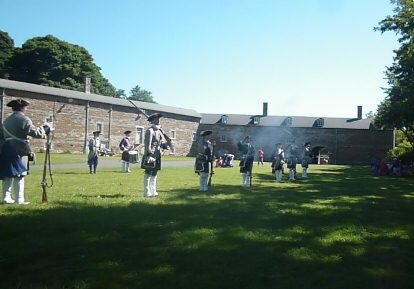