End of the Invasion

End of the Invasion

End of the American Invasion

The Royal Navy ships arrived in the harbour at Quebec City on 6 May 1776. The British reinforcements to land, carried by the fittingly named HMS Surprise, where the first of an eventual 13,000.

American General John Thomas and his men abandoned their siege on Quebec City and fled, leaving behind their wounded and ill. General Thomas withdrew up the St. Lawrence to the mouth of the Richelieu River, where he died of smallpox, the decease that had claimed dozens of his men during the siege of Quebec.

He was replaced by General John Sullivan, who was determined to turn the present-day Sore into a base for the American forces, thus he fortified the site and taught his men military tactics and so on. He assembled about 2500 men in two months. In June 1776, however, Governor Guy Carleton began moving a force of about 3 thousand towards Sullivan’s army.

The Americans moved to meet the British at Trois-Rivieres in what was intended to be a surprise attack. But Sullivan fell victim to anti-American sentiment that had taken root in Quebec.

A Canadian guide led the force intentionally away from the British. After his betrayal was discovered, the Americans tried to retrace their steps, but they were spotted and fired upon by British vessels on the river. In running for cover, the Americans became separated. Several hundred of them, led by William Thompson confronted a line of entrenched British regulars under General John Burgoyne.

Thompson charged, but quickly withdrew under heavy fire only to find their retreat was blocked by another line of British regulars. However, Carleton provided a route out, allowing the Americans to escape to the Richelieu. Nevertheless, about 250 soldiers of the Continental Army chose to surrender, rather than risk further combat, ambush and starvation. Questioned about his decision, Carleton responded: What would you do with them? Have you spare provisions for them?

Or would you send them to Quebec to starve? No, let the poor creatures go home and carry with them a tale which will serve his majesty more effectually than their capture. The Battle of Trois-Rivieres marked the end of the Continental Army’s attempts to capture the province of Quebec.

Two other battles took place at Cedars and Vaudreuil, leading to a loss of more than 500 men. No longer able to control Montreal which was growing increasingly hostile, one 15 June 1776 the Americans attempted to set the city ablaze, without success.

Then they retreated up the Richelieu River and into Lake Champlain, the very same route Montgomery’s column had employed to reverse the previous autumn. In the late June, the Continental Army left Quebec. 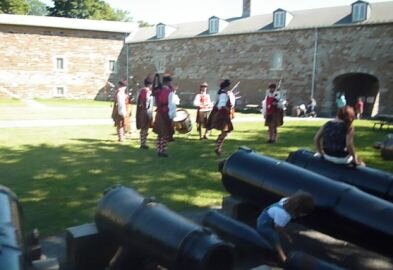