The first ship to ever sail in the Great Lakes was launched on August 7, 1679 above Niagara Falls.

This ship was named Griffon, after the symbol of Buade de Frontenac's, Governor of New-France, coat of arms. The Griffon weighed 45 tons and could carry a crew of 30. It had seven guns. The first ship was built on orders from French explorer Rene-Robert Cavelier, Sieur de La Salle, who needed it for his expedition in search of the North-West passage to China. <

La Salle was granted the royal permission to explore the western half of North America, in May 1678. Before, he had already explored part of the Great Lakes and some areas to the south. It was on one of his previous expeditions that La Salle and his chaplain, Father Louis Hennepin, discovered the Niagara Falls.

La Salle decided that he needed a ship for his new task and brought his men came to Niagara in 1678 to work on it.

The Griffon was on the stock in January 1679 when La Salle was forced to go to Fort Frontenac (today's Kingston). By the time he returned in July, the ship was almost finished. Before heading south to explore the continent's great rivers, La Salle plans were to sail the Griffon to the Baie des Puants (Green Bay) for furs to bring back to Niagara.

He managed to fulfill his plans, and the ship sailed into Lake Erie carrying La Salle and his crew westward on their expedition down the Mississippi. On the return journey, the ship was heading back laden with furs, but it mysteriously disappeared with its crew of seven and the furs, and thus was dubbed the Ghost Ship of the Great Lakes.

Much later, Le Canada, built in 1738, was the first important ship to be built in Canada, though ships had been built in varying sizes since 1606. She saw service with the French Navy. 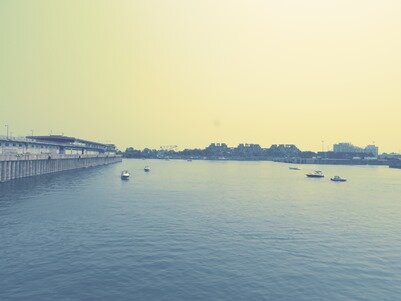