The American Civil War (1861-1865) gave rise to new fears in Canada (which existed as United Province of Canada, composed of Upper Canada or Ontario, Quebec and Labrador).

Great Britain had in fact sided with the South, thus it was now feared that the armies of the North would be unleashed on Canada. Tensions between Great Britain and the North of the United States were very high. Multiple incidents took place on the seas and on the borders between the US and the Union of Canada.

At the same time, many Canadians were opposed to slavery. Canada was the terminus of the Underground Railroad. Besides, economic links with the North encouraged Canadian sympathy towards the Union. However, while the French Canadian establishment was mostly sympathetic towards abolition of slavery, and the Catholic media were opposed to slavery, Quebec was somewhat pro-South in its outlook. All these raisons can explain why the idea of a Canadian Confederation quickly gained support.

It was a political means of addressing the American threat, because if the tension had continued to escalate, Canada would have been the first target of American Union forces. While the Civil War raged, rising concerns over the security of communications in Canada led to the creation of the new militia unites, such as Grand Trunk Brigade, recruited amongst railway employees, Scottish Highlanders Battalion, Shefferd Highlanders Battalion and others. Canada also became home to a number of Confederate operations.

In December 1863, the Confederates captured the American ship Chesapeake and took it to Halifax harbour. The Union launched an operation to retake the ship, in Halifax harbour. Two Canadians were captured aboard the vessel, and for a few weeks it seemed that the war was inevitable.

The most important and controversial incident was the St. Albans raid. A group of Southern guerrilla men attempted to launch military operations from Canada. In October 1864, this group attacked the town of St. Albans, Vermont. Then they retreated to Quebec. The Confederate raiders were arrested, but the charges against them were dismissed. However, the American Civil War gave place to one of booming economic growth for Canada. The war created a huge market for Canada's agricultural and manufactured goods. The manufacturers sold their products to both the northern and the southern sides.

Besides, the collapse in Southern States' exports also led to increases in the prices of many of Canada's exports. Politically, the war and the tensions between the United States and Britain led to concern for the security and independence of the British North American colonies, helping to consolidate momentum for the Canadian Confederation which finally was created in 1867. 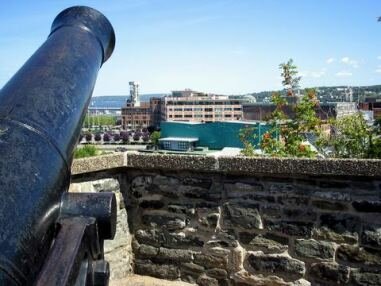