A few lines from The History of Emily Montague by Frances Brooke, a novel published in London, England, in 1769: “Nothing can be more striking than the view of Quebec as you approach; it stands of the summit of a boldly rising hill at the confluence of two very beautiful rivers, the St. Lawrence and the St. Charles.

The island of Orleans, the distant view of the cascade of Montmorenci and the opposite village of Beauport add greatly to the charms of the prospect… In short, the loveliness of this fairy scene alone more than pays the fatigues of my voyage and, if I ever murmur at having crossed the Atlantic, remind me that I have seen the River Montmorenci.” “The road from Quebec to Montreal is almost a continued street, the villages being numerous and so extended along the banks of the river St. Lawrence, as to leave scarce a space without houses in view.”

“The Island of Montreal, on which the town stands, is a very lovely spot; highly cultivated and though less wild and magnificent, more smiling than the country round Quebec: the ladies, who seem to make pleasure their only business and most of whom I have seen this morning driving about the town in caleches (Canadian carriages), and making what they call the tour de la ville, attended by English officers, seem generally handsome and have an air of sprightliness with which I am charmed.”

Mrs Brooke makes the following amusing remarks about the New Year’s Day in 1767: It is a Canadian custom to visit all the ladies on New Years’ Day, who sit dressed if form to be kissed. I assure you, however, our kisses could not warm them, but we were obliged, to our eternal disgrace, to call in raspberry brandy as an auxiliary…

You would have died to see the men: they look so just like so many bears in their open carioles, all wrapped in furs from head to foot, you see nothing from the human form appear, but a tip of a nose.

They have entire coats of bear skin, exactly like Friday’s in Robinson Crusoe. The ladies are equally covered up, though in a less unbecoming style; they have long cloaks, with loose hoods. 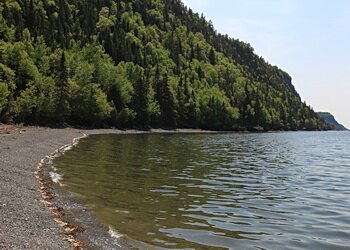