Phips’ planned assault on Quebec involved a total of 32 ships, on which four where significant in size. It was not until 19 August, 1690 that Phips finally set sail from Boston.

As his flotilla made its way up the Atlantic Coast to the Gulf of St Lawrence and up the river, it was delayed further by inclement weather, contrary winds and unfamiliarity with the waters on which the ships sailed. On 16 October, 1690, after a long voyage of 58 days, the ships dropped anchor in the Quebec basin.

The commander dispatched an envoy, Major Thomas Savage, to meet with the Governor of New France, Louis de Buade Comte de Frontenac. Major Savage was led blindfold through the streets of the city past jeering crowds. This French tactic served to exaggerate the number of citizens within the fortified site.

The envoy delivered to Frontenac a summons of surrender. When finished, Savage informed the inhabitants that they had one hour in which to act in accordance with the demands of the English. As he awaited the response, Frontenac spoke in French. His phrase became famous in Quebec: I don’t any answer to give you for now. I’ll answer by the mouth of my cannons and my rifles.

Then, in order to impress Savage, Frontenac gave the order to have the English hanged within view of Massachusetts Bay fleet. Francois de Laval, the Bishop of Quebec, intervened and ‘prevented the Governor from doing so”.

In fact, all this was just a comedy to show the English than the French were ready to fight and had no doubt about the issue of the battle. The  Major Savage returned to Phips and delivered Frontenac’s response. It became evident, the battle would be long and difficult. Still, Phips was sure than he would win… 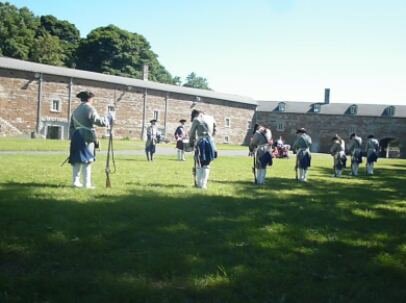 French soldiers of the French Companies of the Marine excercising with their arms. Photo : © ProvinceQuebec.com