In 1755, a new bloody war started between France and England. It was to last seven years, and New France was destined to be one of the theatres of this global conflict. Indeed, France was a continental power with its strength primarily in its army based in Europe.

England, on the other hand, was a maritime power, and its fleet enabled the country to pick its battles at will. As a result, England planned to attack the French colonies in North America. The rivalry between France and England on the American continent would concentrate on the Atlantic seaboard, around the Lake Champlain Region, and in the Ohio River Valley.

On June 17, 1755, the French Fort Beausejour falls to the British in the French-held Acadia on the Atlantic shore. The same year, between 6 000 and 7 000 Acadians were deported from the area by the British. In July, 1755, English troops set out to attack Fort Duquesne, located in the Ohio valley, but this time the French and their Indian allies successfully bring the campaign to a halt. The Battle of Lake Saint-Sacrement, on September 8, 1755, was a series of battles whose take place at Lake St. Sacrement, but their outcome fails to prove decisive.

On August 14, 1756, following a short siege, the French capture Oswego and thus assure their domination of the Great Lakes Region.

In 1757, after a big battle, the French take over Fort William Henry, located on Lake Champlain.

On July 12, 1758, fifteen thousand British soldiers attack Carillon. Only 3,000 French troops succeed in putting their adversaries to rout. But on July 26, 1758, the British take over Louisbourg after a long siege of seven weeks. To take the town, they assembled more than 150 ships and 28,000 men.

The French were able to muster a mere 6,000 men. However, the long resistance allowed the French to save Quebec city from the imminent attack. In 1759, under the pressure of the British, New France begins to come apart. The French lose the strongholds at Niagara, Carillon and St-Frederic, which fall one after another.

On June 23, 1759, an English fleet of close to 150 vessels carrying about 40,000 men cast anchor close to the capital of New Freance. A three-month siege ensues, which features continual bombardments.

In a decisive battle, the British engage the French in combat on the Plains of Abraham in the early hours of September 13, 1759. The French are defeated and Quebec City surrenders on September 18, 1759 Yet, the English are not masters of the country. Despite the surrender of Quebec, far from having been annihilated, the French are victorious on April 28, 1760, at Sainte-Foy, near Quebec City, forcing the British to take refuge behind the walls of Quebec. But the fate of New France was sealed.

On September 8, 1760, Montreal, the last important stronghold of New France, unable to defend itself, capitulates. The war is over in North America. 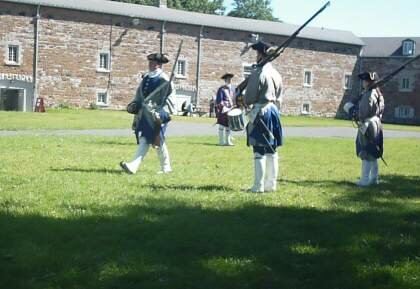 A group of French marines in 1757, photograph in colours taken by an English spy, ProvinceQuebec.com archives