Bigot and the war

Bigot and the war

Bigot and the war

Winning or losing a war does not depend solely on the actual fighting of soldiers in the battlefield. It is very important that all fighting men should be properly fed, so that their strength may be maintained.

Soldiers must have guns, powder, and the means of making war. All this costs money. One of the chief reasons for the fall of New France was the very bad management of all these questions.

The government was largely in the hands of selfish men, who thought only of their own wealth and pleasure, caring nothing for the short rations and poor supplies sent to the fighting men. François Bigot, the intendant of New France, with power almost as great as that of governor, had a bad record even before he became the intendant. In Louisburg, where he had been for a few years, when the city was in French hands, Bigot was suspected of stealing public founds. But Bigot had friend at the corrupt court of France, thus as soon as the position of intendant of New France becomes vacant, he is able to obtain the appointment. Once in Quebec, Bigot set himself to make a fortune.

He gathered about a group of men, such as Deschenaux, who once declared that to get rich he would even rob a church; Cadet, a butcher, whose business gave him the chance for much crooked dealing in supplying meat to the army; the Captain Hughes de Pean, the town major, who was bolder in evil tricks than he was on the field of battle.

These men laid plans for plundering the country. For example, Bigot and de Pean bought wheat at as low a price as possible. The Bigot forced the government to pass an act agreeing to purchase the grain at a much higher figure.

Then the friends sold their grain to the government and divided the profit. Thus in the last years of New France her worst enemies were not those the country faced on the borders, but those who were weakening the colony at home and who were using for their own gain the supplies that should have been sent to the army.

The General Montcalm complained of these practices again and again. So, across the seas in France, the king saw disaster coming upon New France, but he wouldn't do anything. 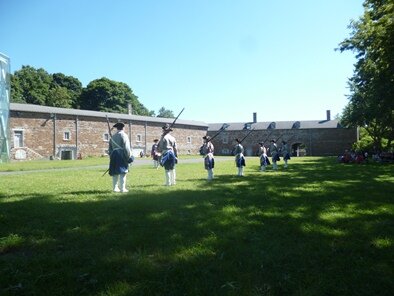