The outbreak of war in 1754 inaugurated a sombre period for Montreal’s residents. Disruptions of the fur trade were continuous, scarcity of essential supplies became evident, runaway inflation and epidemics followed.

In September 1759, Quebec City fell to the British forces after a long siege. Montreal becomes the provisional capital of New France, but in the summer of 1760, three British armies converged on the town. On September 8, 1760, faced with certain defeat, Montreal capitulated without a sing short being fired. After the capitulation, French officers, soldiers and most administrators were sent back to France. In 1763, according to the Paris Treaty, New France becomes a British colony.

In August 1764, the last French families wishing to leave the Canada, sold their properties – often at considerable loss – and left for France, as August was the last date at which the treat allowed French subjects to do so. The decades that followed the cession of Canada to Britain were marked by institutional, political and economic uncertainty.

British merchants possessed capital and connections. They could purchase properties cheaply. French imports were replaced by household articles and other merchandise made in Britain. For 15 years, only Protestants were entitled to occupy administrative positions in Montreal In 1775, however, the anomalous situation was reversed, when the Quebec Act comes into effect.

The Act, adopted in 1774 by British Parliament, allowed French civil law and recognized the property and religious rights of the French Canadians, therefore allowing them to hold public office. 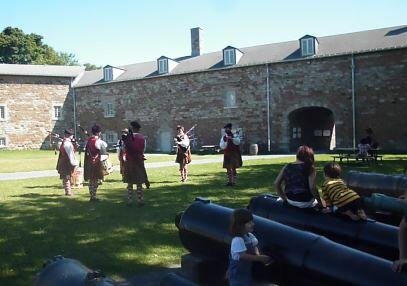