The Canadian cow, also known as Black Canadian and French Canadian, descends from the earliest farm animals brought to New France in the 17th century.

It's considered the oldest cattle breed in North America. Canadian cattle were developed from animals imported from Normandy, Brittany and Gascony. This stock was selected for hardiness and productivity in the New World. For many years, the population remained largely closed to other breeds.

The Canadian cow is small in size (cows weigh up to 1100 pounds, but it's recognized for its hardiness as well as for the high fat concentration in its milk. Thus, the milk of the Canadian cow is well suited to milk and cheese production.

The Canadian cow is well adapted to the Canadian climate, soil and herbage. The animal does not require the importation of expensive foods or intensive management.  It is long-lived and has a docile temperament. Their meat tends to be lean. Canadian cattle are black or dark brown, often with paler muzzle, side, and udder or scrotum.

There may be white on the udder, stomach and chest. In the end of the 19th century, about 75% of the milk herd in Quebec were the Canadian cows. But the increasing demand of the milk made replace this breeds with other breeds that produced more milk, even if it contained less fat. Unfortunately, by the mid-1800's a number of influential farmers were encouraging the crossing of the native Canadian with imported breeds less adapted to local conditions.

In order to save the breeds, in 1895 a group of concerned breeders and academics joined to form the Canadian Cattle Breeders Association. Later, Quebec government has initiated several programs aimed at conserving the breed and encouraging the breeders to continue.

Most Canadian cattle continue to be found in the province of Quebec. 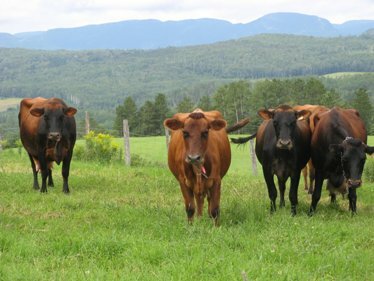