In 1775, many Americans feared that their cause would be hopeless unless they could prevent Britain from using Canada against the young republic. That was why they invaded Canada. On October 24, 1774, the Amercan Continental Congress addressed the Canadians in a long letter.

The Congress proclaimed the right of British subjects to government by their own elected representatives, to trial by jury, to habeas corpus, to free tenures, to liberty of the pres. The letter pointed out how the Great Britain had violated these fundamental principles by imposing a government composed of tool of the Governor, who, in turn, was the tool of the British government. The Americans invited the Canadians to join in an eternal brotherhood of liberty, and, as a first step they advised their Brothers to form a provincial congress which would send delegates to the next continental congress in the following May. One passage of the document suggested that Canada would be treated as a foe if it would not be a friend.

About the same time that this formidable message was sent, the provincial congress of Massachusetts, under the influence of Samuel Adams, began to feel about the some way of getting in touch with the people of St. Lawrence. In December, 1774, the provincial congress of Massachusetts appointed a committee to “correspond with the inhabitants of Canada”. In February, 1775, John Brown, a promising young lawyer and a graduate of Yale, set out for Canada as the agent of Boston committee of correspondence. He went to Montreal, armed with a stock of revolutionary pamphlets.

Many other Americans crossed the border regularly with the same materials and Montreal's communication with the south was broken only during a few weeks, when Lake Champlain was impassable (John Brown himself was delayed several weeks by the breaking of the ice on the lake). The Americans had no doubts that the door of Canada was wide open for the Revolution to enter.

Though the Quebec Gazette, the only newspaper then in Canada, refused to publish the congressional appeal, the silence of this document made little difference. Copies of the appeal in English an translation spread among the population of Canada, as every American merchant brought a few dozens of leafs. The message from the south, improved by local comments, was soon echoing up and down the valleys of the St. Lawrence and the Richelieu, awakening the hearts of the Canadians hopes and fears. Besides, people believed the Bostonians were as numerous as the stars and would lay Canada waste if the Canadians ventured to appear in arms against them.

John Brown was delighted with what he saw and heard in Montreal, and messages from him and from many others began to pour south announcing that he dreaded Canadians were all friendly and would even join in revolt against the Great Britain. 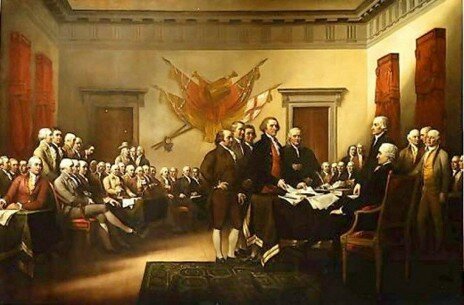