First contacts between the First Nations and the Europeans

When Jacques Cartier sails up the St. Lawrence River, in 1535, he and his crew see many Iroquoians and their villages through the entire Laurentian Valley. However, in 1603, when Samuel de Champlain sails the river, all the settlements seem to have disappeared.

How can their disappearance be explained? Were they annihilated during the tribal wars our just left the valley because of unknown natural phenomena, like bad harvests and so on? We will never know.

The fact remains that at the turn of the 16th century, when Jacques Cartier made his three voyages to Canada on behalf of France, he met the St. Lawrence Iroquoians during each trip and he found large villages along the St. Lawrence, divided in so called provinces.   Stadacona and a number of smaller villages in the Quebec city region belonged to the province of Canada, whereas the villages in the today's Montreal region belonged to the province of Hochelaga. Some historians maintain that there is evidence for as many as three other provinces.

Cartier observes the political importance of the province of Hochelaga to which the province of Canada appears to submit. In 1541, during his third trip, Cartier succeeds in going beyond the Lachine Rapides crossing by land. The succinct description of this brief expedition reveals that small Iroquoian communities occupied the lowlands along the bank, possibly in seasonal fishing camps.

Back to the departure of the Iroquoians from the St. Lawrence Valley, we can state taht it was the dominant event of the second half of the 16th century and it had nothing to do with the Europeans who were absent from Canada for 60 years.

Around 1580, the first French merchants began to make their presence in the St. Lawrence Valley, after they had discovered the vast potential of furs from Canada, but they did not play any role in the history of the First Nations during that period, even when the sealed their first alliances with the Montagnais, the Algonquin, the Huron, the Mik-Maq and the Maliset who came to replace the Iroquoians. 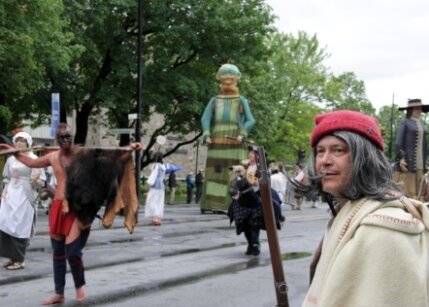