Jacques Cartier, French explorer who claimed Canada for France, was born in Saint-Malo, which later became part of France, in 1491. There is no written account of his childhood, though we can assume that he grew up playing on the beaches of this port city. Later, he studied navigation in Dieppe.

Jacques Cartier sailed to Canada three times: in 1534, 1535, and 1541. He is the first European discoverer of the St. Lawrence River and the first European to make a map of the Gulf of St. Lawrence. He gave Canada its name mistaking the Mohawk word for village (kana:ta') for the name of the whole land. Jacques Cartier’s first trip to Canada took place on 21 April 1534, when he, commissioned by King Francis I, set sail hoping to discover a western passage to the wealthy markets of Asia. His two ships sailed around the northern tip of Newfoundland and along its western coast into the Gulf of St. Lawrence.

Cartier landed on the Gaspé Peninsula and formally claimed the area for France. During his second voyage, Cartier continued the exploration of the St. Lawrence River. He sailed up the river to a native village at the base of a large mountain, which he named Mont Real (that later gave name to the city of Montreal).

With winter approaching, Cartier sailed down the river and established a camp at the eventual site of the city of Quebec. The following spring, the expedition returned to France. During his third trip to Canada, Cartier fruitlessly searched for gold. The winter at the camp brought hardships worsened by the Indian attacks.

In the spring, Cartier expedition began the return voyage to France. Despite the contributions to a better understanding of North American geography, Cartier’s expeditions were regarded as a failure because no gold had been discovered and no lasting settlements had been created. The areas he explored remained largely untouched by Europeans until the early years of the next century.

No permanent European settlements were made in Canada before 1608 when Samuel Champlain founded Quebec City. Cartier spent the rest of his life in Saint-Malo and his nearby estate. Like many Europeans of his time, he died from an epidemic (may be, of the plague) on september 1, 1557. 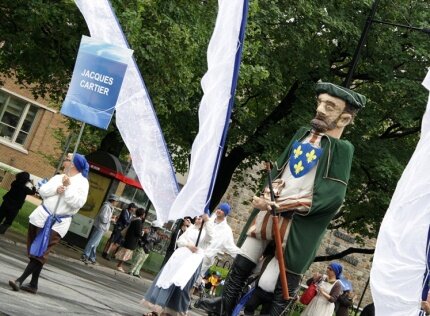