His real name was Calixte Lavalle.

In 1857, at the age of 15, he travelled to the U.S, as many other men from Quebec did at that time. He settled in the State of the Rhode Island.

During the American civil war he enlisted in the Union army and eventually attained the rank of Lieutenant.

At the same time, he developed a career in music. He lived for some time in California and in Lowell, Massachusetts, where a large French Canadian community existed and where Lavallee married Josephine Gentilly, in 1867. He conducted major orchestral and operatic productions in important concert halls like the Montreal Academy of Music in Montreal and the Grand Opera House in New York.

He is the author of various pieces, songs, operettas and at least one symphony. He was famous as a pianist, organist, and teacher.

In 1880, Calixa Lavallee was commissioned by the National Congress of French Canadians to compose "O Canada" for the St. Jean-Baptiste Day celebrations. This song became Canada’s National Anthem. He died in Boston on January 21, 1891.

In 1933 his remains were buried in the Montreal Cote-des-Neiges Cemetery. The municipality of Calixa-Lavallée, named for the composer, is an off-island suburb of Montreal, in southwestern Quebec, east of Montreal in the Regional County Municipality of Lajemmerais. 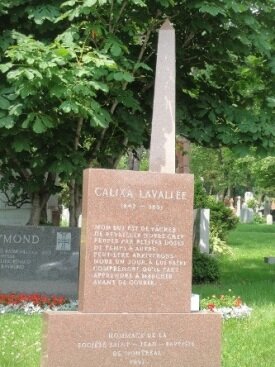