To Giovanni Caboto the Italians of Canada. II Maggio MCCCCXCVM

These words are carved in English, French, and Italian on the monument to Giovanni Caboto (known as John Cabot in English) standing in the downtown of Montreal.

Not much is known about his birthplace, but it is commonly believed that he was born near Naples around 1450 and spent part of his childhood in Genoa, Italy. In 1476, Giovanni Caboto became a citizen of Venice. A merchant like his father, Caboto frequented sailors, ship builders, and cartographers. He participated in many trade expeditions around Europe and it seemed that he was also involved in real estate transactions. In 1488, as a result of some bad deals, he had to leave Venice to flee from his creditors. In the early 1490s, he found shelter in Spain.

On March 5, 1496, King Henry VII of England issued letters patent to Caboto and his sons, Louis, Sebastien, and Santius authorizing them to sail to all parts “of the eastern, western and northern sea” to discover and investigate, “ whatsoever islands, countries, regions or provinces of heathens and infidels, in whatsoever part of the world placed, which before this time were unknown to all Christians.” With the knowledge gathered during his trade expeditions, Caboto elaborated a theory of the shortest way to reach Asia: sailing west across the North Atlantic.

Estimating that this would be shorter and quicker than Columbus' southern route, Caboto found England to be a logical starting point to reach Asian riches and thus persuaded King Henry VII to finance an expedition.

On May 2, 1497, from the port of Bristol, he set out for conquering a northwestern passage aboard Matthew, a square-rigged 50-ton sailing ship, with a 19-people crew.

Caboto reached the coastline of Newfoundland on June 24, 1497, and took possession of it in the name of King Henry VII. Here, he discovered waters rich in fish, traces of dwellings, and the Brazil, a dye tree. Some researchers, however, consider the land to be Labrador or Cape Breton.

John Cabot returned to Bristol on August 6, 1497. Even though he didn’t bring riches he had expected to find, he was received as a hero and the first explorer of the modern era to touch the ground of North America. The discovery was declared to the credit of the King of England.

The next year, 1498, he departed again, with 5 ships this time. Never heard from again,  Cabot and his expedition were presumed to be lost at sea. On May 25, 1935, the Italians willing to emphasize their presence in Canada and in Montreal in particular erected a monument in honor of Giovanni Caboto, their compatriot. 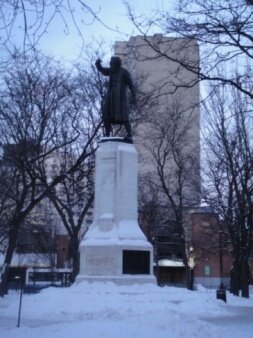