Agathe de Saint-Père-Le Gardeur de Repentigny was born on 25 february 1657 in a family of renowned colonists of Ville-Marie (Montreal).

Her father, her grandfather Nicolas Godé, and her godfather Raphaël-Lambert Closse, were killed by the Iroquois. In 1658 her mother, after she had been widowed, married the merchant Jacques Le Moyne de Sainte-Marie, and Agathe de Saint-Père thus entered a new family.

Agathe, who was barely 15, took over the raising of the ten Le Moyne children, the youngest of whom was a new-born baby. On 28 November 1685, she married the ensign Pierre Legardeur de Repentigny. A son and seven daughters were to be born of her marriage. Agathe de Saint-Père, very energetic and dynamic, outshined her husband in the affaires. Indeed, she signed contracts, made profits on fur-trading licences, bought and sold land, made loans, and settled accounts and debts of her husband and her brothers-in-law.

At the beginning of the 18th century the hard economic situation forced New-France to manage on its own resources. To make up for the shortage of linen and wool, Mme de Repentigny experimented widely, especially with nettles and bark fibres, cottonweed, and the woolly hair of the buffalo. The king of France liked the samples of cloth she had sent him for his appreciation (and he enjoyed the maple-sugar candy of her own making).

In 1705, when news arrived of the shipwreck of the Seine, which was bringing supplies for a whole year, this daring woman set up a factory to make linen, drugget, twilled and covert-coating serge. Mme de Repentigny ransomed nine English weavers who were prisoners of the Indians, hired them, and assigned Canadian apprentices to assist them. Several inhabitants of the island of Montreal learned the techniques and soon there were more than 20 looms in the town, which turned out daily 120 ells of coarse cloth and canvas both hard-wearing and cheap.

The indefatigable and hard-working Mme de Repentigny discovered, with the help of a blue stone and native tinctorial plants, a number of dyes and new processes for fixing colours. She even succeeded in dyeing deerskins without treating them with oil. She retired from her business in 1713.

After her husband’s death in Montreal in 1736, Agathe chose to finish her days at the Hôpital Général of Quebec, where she rejoined her daughter, Marie-Joseph de la Visitation, who was to be superior there for nine years, and she was also living nearer to another daughter, Marie-Jeanne-Madeleine de Sainte-Agathe*, who had been a nun in the Ursuline convent.

Although her death certificate has not been found, it is likely that she passed away in 1748, at the age of 90, as the annalist of General Hospital inscribed under the heading of receipts at the end of the year the sum of 400 livres, the “first legacy from Madame de Repentigny.” 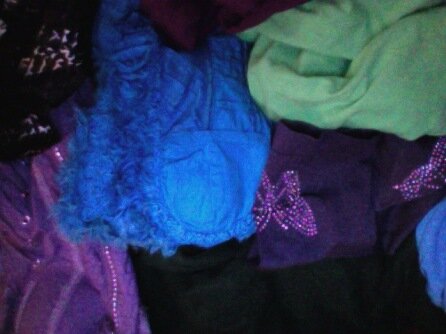 Today's clothes come in so many colors, it is easy to take shades for granted, but in the past dying fabrics revealed a whole other story… Photo © provincequebec.com