Jean Vauquelin, the son of a captain in the merchant marine, went to sea with his father at the age of 12.

During the War of the Austrian Succession he served as an officer on a privateering frigate he bought himself. Becoming a captain in the merchant marine around 1750, he had completed 21 voyages before being recruited by the naval commandant at Le Havre at the beginning of the Seven Years’ War as an officier bleu (the term means officers of the merchant marine or naval officers who serve on the king’s ships as subaltern officers on a voluntary temporary basis without commissions).

On 26 April 1757 Jean Vauquelin received command of the frigate Tourterelle. In February 1758 he is commissioned a lieutenant in the royal navy and given command of the Arethuse, a 36-gun frigate. Vauquelin is sent to Île Royale (Cape Breton Island). Despite Edward Boscawen’s blockade, the brave Frenchman succeeds in entering Louisbourg harbour on 9 June 1758.

The Arethuse hindered the British landing operations significantly by keeping them under fire from the rear. Vauquelin’s accurate gunfire caused substantial losses and notably delayed the construction of siegeworks. At the beginning of July Vauquelin received permission from Governor Augustin de Boschenry de Drucour to go to France with dispatches and to inform the minister of Marine of the plight of the fortress.

He set sail on the night of 14–15 July 1758, ran the British blockade once more, and reached Europe after a rapid and uneventful crossing, casting anchor at Santander in Spain on 2 August 1758. As a result of this brilliant manœuvre Vauquelin received a congratulatory letter from the minister.

Jean Vauquelin is back in Canada in 1759 as commander of the frigate L’Atalante. His crew takes part in the defence of Quebec City, and in the spring of 1760 Vauquelin formed a small division composed of the Atalante, the Pomone, the flute Pie, and some light craft, which left Sorel for Quebec on 20 April to follow Levis’s army and supply it. he reached the Anse au Foulon on 28 April, the day of the French victory at Sainte-Foy.

Pursued on 16 May by the Lowestoft and the Diana, Vauquelin drew them off towards Cap-Rouge to save the army’s supply depots and then had to run his ship aground at Pointe-aux-Trembles (Neuville).

He used up his ammunition and then, having nailed his flag to the mast under the enemy’s steady fire and thrown his sword into the St Lawrence, he ordered his crew to leave the ship. He had been wounded, and he was taken prisoner with the three officers, the ship’s writer, the chaplain, and the six sailors who had remained on board.

Vauquelin had greatly impressed his enemies with his bravery. He was quickly released. In France Vauquelin was appointed commander the flute Bricole and later of the flute Garonne. In 1769, Jean Vauquelin was accused of trading illegally, and upon his return to France in December 1769 the king ordered him confined in the château of Le Taureau on the Baie de Morlaix. He was released on 1st May 1770 as the suspicions about him turned out to be ill founded.

On 10 August 1772 he received command of the Faune, but he fell ill and died at Rochefort three months later. The monument to Jean Vauquelin was unveiled on the Jacques-Cartier Place of Montreal on June 22, 1930. 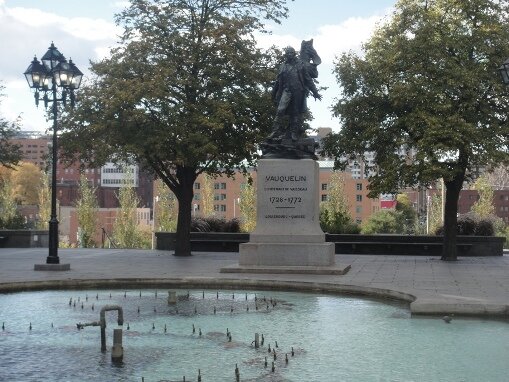