He became a soldier at the age of thirteen and served in the Dutch war. He was proposed by Father Jerome Lalemant to command the company sent by Royer de la Dauversiere to found a new town on the Island of Montreal.

Paul de Maisonneuve landed on the island with his followers on 17 May, 1642. On that occasion, a small group founded Ville-Marie, future Montreal. Maisonneuve was to remain twenty-five years at the post of Governor of the settlement. The governor-generalship of Canada (New France) was offered by Louis XIV to Maisonneuve, who declined the offer.

Maisonneuve encouraged colonization. As a magistrate he judged with equity and impartiality. He made a few voyages to France to recruit new colonists and to get financial support for Montreal. His government assured the security of Montreal. He favoured agriculture, commerce and education.

De Maisonneuve was considered a real father to the colony. He left Ville-Marie well-fortified and organized in 1665. He not only returned to France empty-handed but donated to the pious foundation all rents and dues accruing to him.

Paul Chomedey, Sieur de Maisonneuve passed away on September 9, 1676 De Maisonneuve is commemorated in Quebec. A statue of him is located at Place d'Armes in Old Montreal.

De Maisonneuve Boulevard, Maisonneuve Park, College de Maisonneuve, neighbourhood of Chomedey in Laval and many other sites honour his name.

A vow that was kept

Paul de Maisonneuve, founder of Montreal in 1642 worried when the St. Lawrence River flooded the following spring, and huge cakes of ice threatened the settlement with destruction. He vowed that if God would cause the waters to recede he would carry a cross to the top of Mount Royal.

When the flood abated Maisonneuve fulfilled his vow. He struggled under the weight of a heavy wooden cross to the highest point of the mountain where he erected it – and down to this day a cross has stood there. 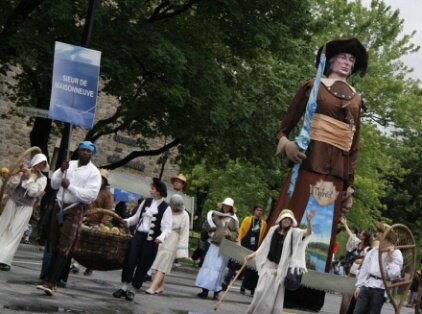