Marguerite Bourgeoys was born in 1620, in the town of Troyes in the Champagne region, France. In 1653, she answers to Maisonnneuve’s request and agrees to accompany a group of colonists who would shore up the defences of Ville-Marie (future Montreal) against the attacks of the Iroquois. During the long and treacherous voyage, she helped dozens of men and women whose arrival tripled the population of the town.

In Montreal, Marguerite Bourgeoys joins Paul de Maisonneuve and Jeanne Mance in the affairs of the settlement. She claims that the women must play a significant role in the future of the city and of Canada and se opens thus workshops where ordinary women learn skills that enable them to earn their living. She helps as well new immigrants to adapt to their new country.

In 1655, Marguerite rallies the inhabitants of Montreal to help build a chapel of pilgrimage, erected, after delays, in 1675.

In 1658, she opens the first school in Montreal, where the children of the colony and the Indian children learn the basics of their faith, counting, reading and writing. The girls learn household skills to prepare for their responsibilities as wives and mothers.

Marguerite goes back to France to find companions for her plans to found the Congregation of Notre-Dame, a community of women who want to help other people, but such a society being rather uncommon in the XVIIth century, ecclesiastical approval was not granted until just two years before Marguerite’s death, in 1700.

In 1982, Marguerite Bourgeoys was canonized. In May 2005, the mortal remains of Sainte-Marguerite where brought in procession to the Notre-Dame-de-Bon-Secours Chapel, where she had lived, worked and died. 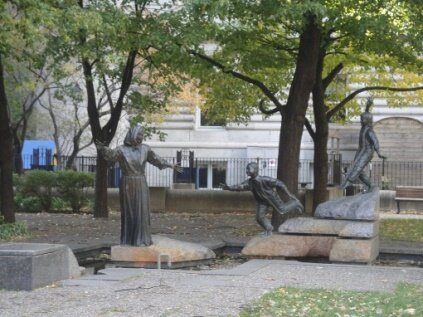 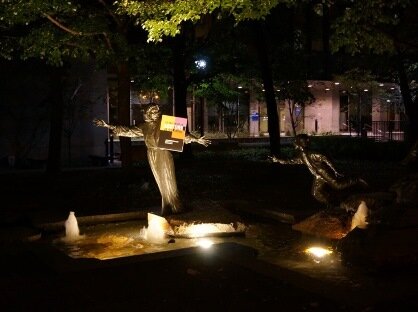 Monument in the night. Photo :© ProvinceQuebec.com