Crowning an ancient promontory above the St. Lawrence River, this museum of history and an archaeological site lets you be transported back through time to another world, that of our ancestors and invites you to hear what they have to say about the people who founded Montreal.

Visitors access to the archaeological site through the crypt. There they find archaeological vestiges among the oldest in the city: the first stone chapel built by Marguerite Bourgeoys and the first settlers and, next to it, traces of an Amerindian campsite dating back more than 2400 years.

The collection of the museum witness to the beginnings of Montreal, education of the children of the colony, life of the Amerindians. Through the construction of a chapel and the founding of the Notre-Dame Congrgation, the museum stands as witness to the achievements of a pioneer woman and of an entire people.

Marguerite Bourgeoys Museum will surprise you with the quality and variety of its programming, available to everyone the whole year long. Artifacts that trace the history of the city are on display in the Crypt and in the Discovery Room.

Accessible to visitors through the Crypt lies a remarkable archaeological site. During the 1996-97 dig, archaeologists made one fascinating discover after another. To their astonishment, the painstaking work of their trowels uncovered the foundations of the first Marguerite Bourgeoys’ chapel, one of the oldest religious sites in North America.

Visitors will see evidence of the fire that destroyed Notre-Dame-de-Bon-Secours, Montreal’s first stone chapel, and vestiges of the wooden palisade that made up the fortifications of the town in 1709. 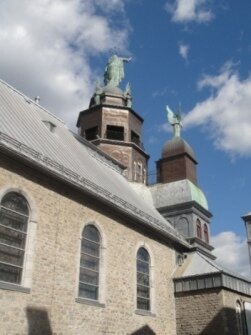