The Musée québécois de culture populaire was created in December 2001. It offers visitors the chance to become familiar with the day-to-day experience, concerns and values of the Quebecers. A museum to view culture in a different way, where fun leads to reflection.

The museum offers visitors two attractions on the same site. The main building presents various exhibitions from the museum. Adjoins the museum, The Old Prison of Trois-Rivières, a historic monument, offers the visit-experience Go to Jail.

The Museum is associated with the Old Prison of Trois-Rivières, a part of Québec's historic building heritage.

François Baillairgé, a Québec City architect, prepared the blueprints for the Old Prison of Trois-Rivières in 1815. The detention centre opened in 1822 and remained in operation until 1986. Designed to hold about forty inmates, it sometimes housed up to a hundred prisoners at once.

The Museum boasts an impressive collection of ethnological objects. Over 200 donors have contributed to the collection which now includes more than 70,000 items. Donations fall under the main categories of traditional occupations, agricultural implements, household objects, clothing, textiles and folk art. The museum manages the Robert-Lionel-Séguin collection, known as one of the most important in Canada on the traditional civilization of Québec. The collection remains the property of the Université du Québec à Trois-Rivières.

Robert-Lionel Séguin devoted his life to one overriding goal - gathering material evidence of the daily life of Québec in times past, a history that had been largely neglected, forgotten or condemned. In thirty years of research, M. Séguin collected some 35,000 objects bearing witness to the rural and domestic life, learning and arts of traditional Québec culture. He was also responsible for creating an archive and a library of over 6,000 titles in addition to documentation on the customs, habits and socio-economic conditions of Quebecers.

The Old Prison, once the longest-operating detention centre in Canada, is now a part of the national prison heritage. The building is an object of fascination and a major attraction in the Museum complex. Today the building divisions are unchanged: the ground floor is in its original state, supported by cedar beams in the basement. Many old doors have been kept. The only staircase has been remodelled several times but remains in the same place it has always occupied. The prison was classified a historic monument in 1978 because of its exceptional architectural qualities. It is currently the site of the visit-experience.
Not to be forgotten is the pitwheel. This was a monumental device made up of a huge wheel - 4.27 metres in diameter - and a gear pair system operated by animals and used to thresh grain. This key exhibit inspired the Museum's architect to highlight it by designing a rotunda in the main hall. 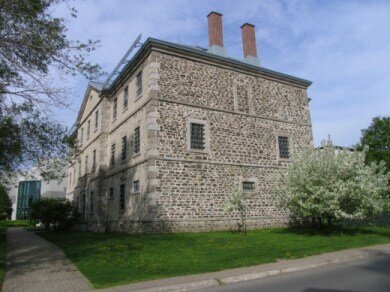 Old Prison, source of the photo: Web Site of the museum